Cockington - A Walk in the Park

Anyone who has read my previous blog about Cockington Village will already be aware that there’s more to Cockington than just a few thatched cottages and a pub, and so today I want you to slip your trainers on, and come with me for a walk in the park.

In this context ‘park’ means Country Park, which in the UK refers to a recreational area which I think of as a half-way house between an urban park and the open countryside.

The idea was conceived in the 1960s to encourage people in urban areas to get up off the sofa and out into the fresh air without having to head off into the sticks and trample all over farmers’ fields.

The Country Park at Cockington, like others throughout the country, was initially set up with central government funding through the Countryside Commission, but surprise surprise, the baton has since been passed over to the local council to foot the bill for the upkeep and provide free access to all.

For people with wheelchairs and pushchairs, the best way to gain access to the park from the village is by walking up the hill past Weavers’ Cottage, and then taking the metalled road on the right. Entering the park is through a gate next to Higher Lodge. The Carriage Drive, as it’s called, then leads through an avenue of lime trees to Cockington Court where the first thing you can’t fail to notice is the Manor House.

Although I’ve already discussed Cockington’s history in the previous blog, it’s worth mentioning the fact that there’s been a Manor House here for nigh on a thousand years. The original wooden Saxon building was replaced by one built of local stone by the de Cockingtons, but what we see today is a legacy left by the Mallock family in 1820 when they demolished several outbuildings and opened out the view across the cricket pitch.

Unless you intend getting married, there’s no point in rushing off too quickly to the Manor House because it’s not the sort of place where television crews are queuing up to film the latest version of Sense and Sensibility. There is a café, Visitor Welcome Point and a Gallery at ground level, but most of the business involves couples who come to tie the knot at Torquay’s official Register Office on the first floor.

Cockington Court has more to offer than just the Manor House though, and behind it is a Tudor Rose Garden and former stables which are now used as craft studios. Here you can watch craftsmen and women using traditional skills to turn metal, wood, and glass into something that they hope visitors will want to take home with them.

Behind the Rose Garden and Stableyard Craft Studios again is another enterprise that will happily relieve you of the contents of your purse, but, apart from the memory, this time you won’t be able to take anything home with you: Horse and carriage rides have been operating in Cockington for as many years as I can remember and have been an integral part of the landscape, but how long it will be able to keep going for I’m not sure. People love to take photographs of them, but taking photographs don’t help to feed the horses – it’s passengers they need.

Next door is an Apple Press, which represents just one of many events that regularly takes place in Cockington’s calendar: Every October, Apple Day is the culmination of harvesting the orchard’s apples, pressing them, and turning them into pure natural apple juice – but not into its fermented form of cider, which seems a complete waste of resources if you ask me.

Before moving on from the court, I’d like you to take a look at the nearby Walled Art Garden which is in the process of being transformed into a community project, which not only grows organic crops amongst a creative space, but also helps vulnerable adults as well. It’s a haven of peace and tranquillity and somewhere to linger for a while and just be at one with nature. A worthwhile project if ever there was one.

Just to the south of the Manor House is the delightful church dedicated to St. George and St. Mary. Although the earliest documented evidence is from 1113-15, it’s believed to have been here since William de Falaise had it built in 1069 as a chapel for the Lords of the Manor.

In 1203 this Grade II listed building and the land around it, was leased to the monks of Torre Abbey who administered it until Henry VIII dissolved the monasteries in 1538. Architecturally, the oldest part of the church is the 13th century tower, but the main structure is largely 14th and 15th century.

Of the internal features, there are a couple worth looking out for: The first is associated with the Cary family (one of the influential Cockington families I talked about in my previous blog). The Caen stone font was installed by Sir Robert Cary in 1490 and has an octagonal shape with each face showing a shield of the families that the Carys married into.

The second is the pulpit, which is not adorned with the usual Christian emblems, but roughly carved images of rams’ horns, anchor chains and fish scales. Legend has it that it came from the Spanish Galleon, the Nuestra Senora del Rosario, which was captured and brought into Torbay. Nobody really knows the truth of it, or what its original purpose was, but nobody could argue that it’s unusual.

I’m now going to take you through the Arboretum, but before we go too far, near to the church is the oldest tree in the park. This Sweet Chestnut dates back some 400 years and is one of the oldest in Torbay, so try not to miss it.

There’s no set route through the arboretum, so it’s just a case of wandering around admiring the trees. Birch, Hornbeam, Flowering Cherries, and other specimens are scattered across the open parkland, but as there’s no catalogue of what they all are, it’s difficult to be more precise. When I was working here, there was another volunteer who had an avid interest in trying to identify and catalogue all the trees here, but I don’t know far he got.

Below are some pictures taken in the Arboretum; the first one is of the 400-year-old Sweet Chestnut. 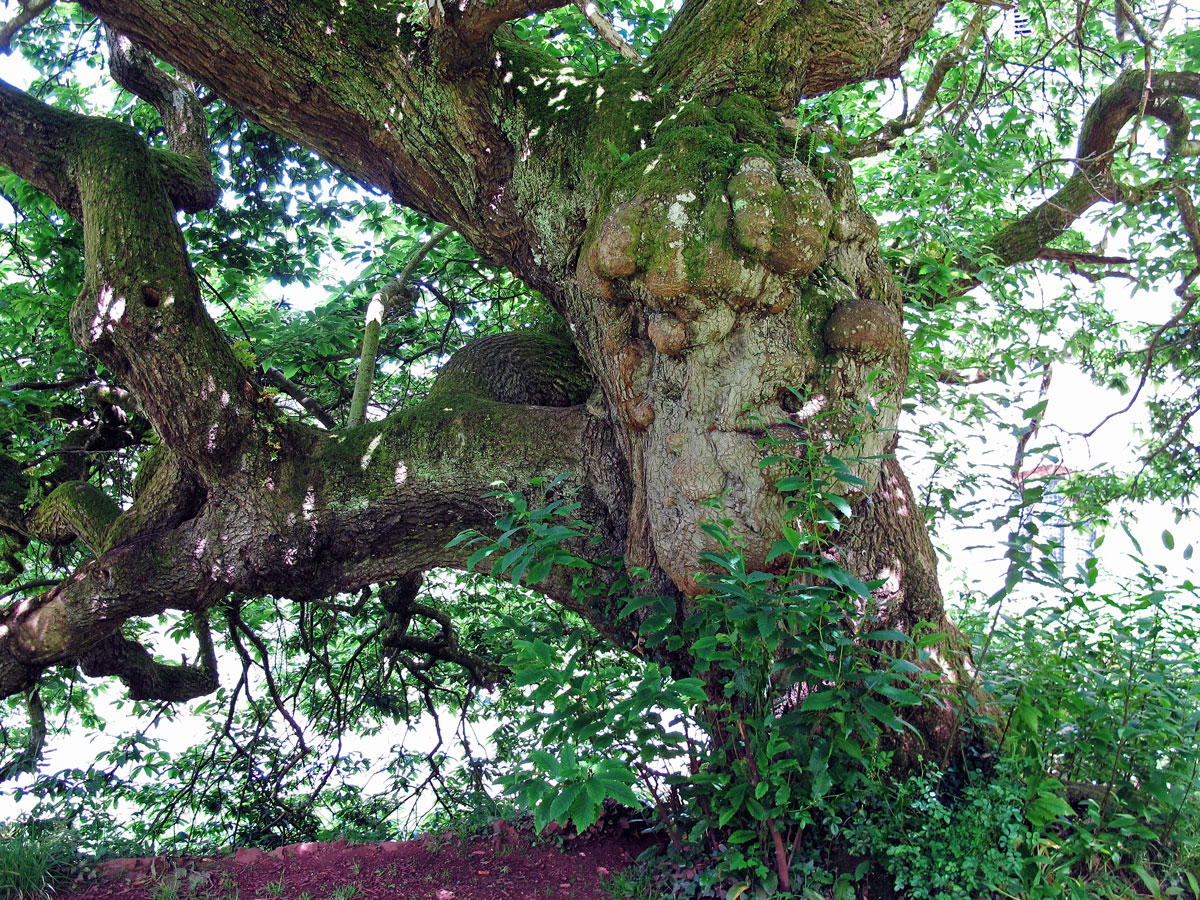 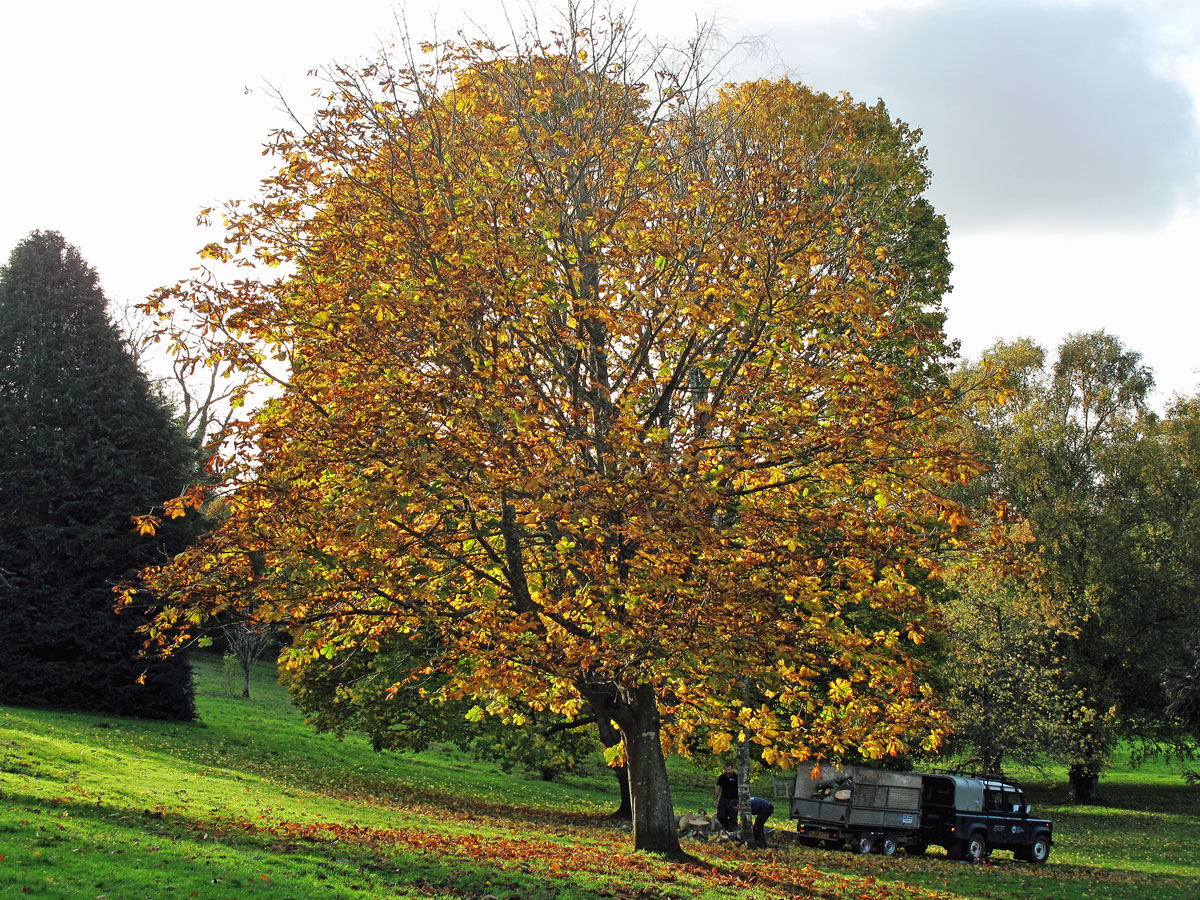 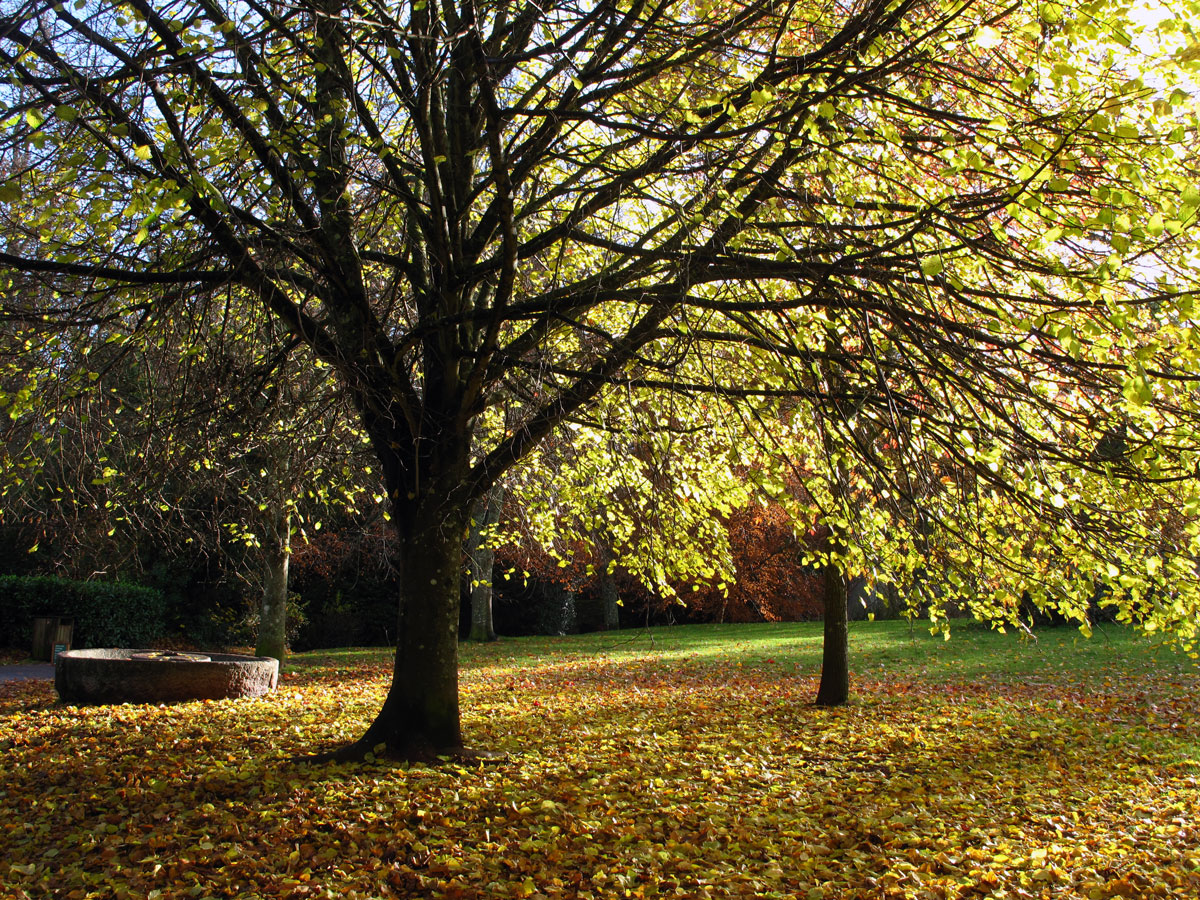 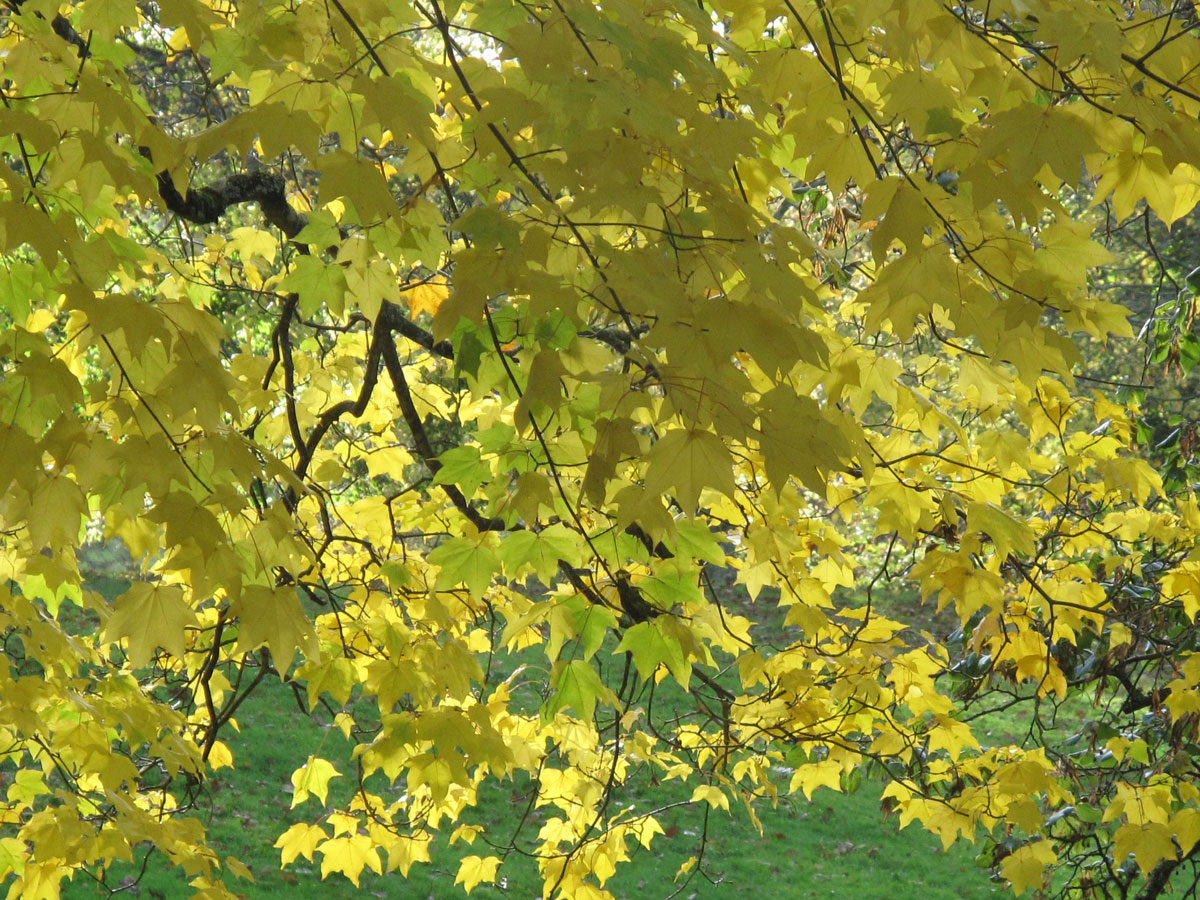 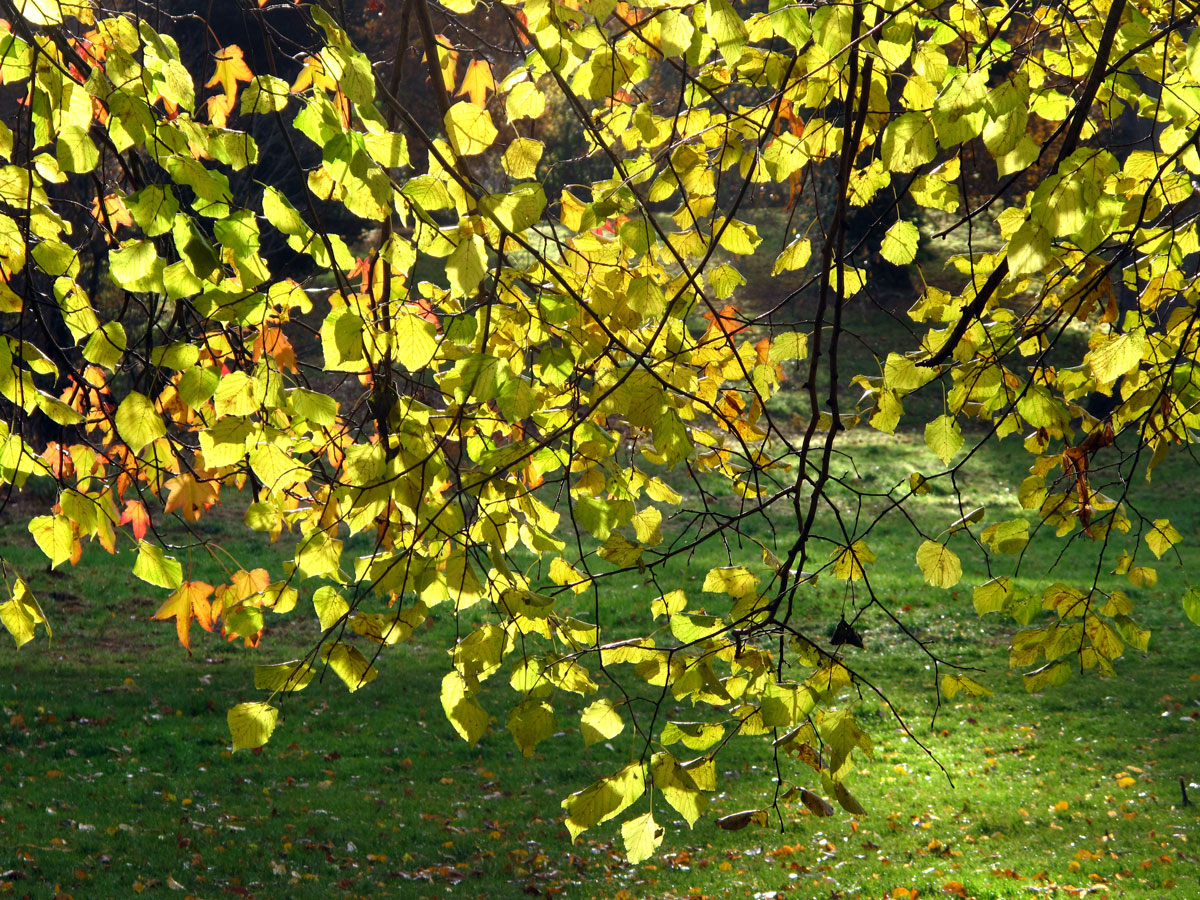 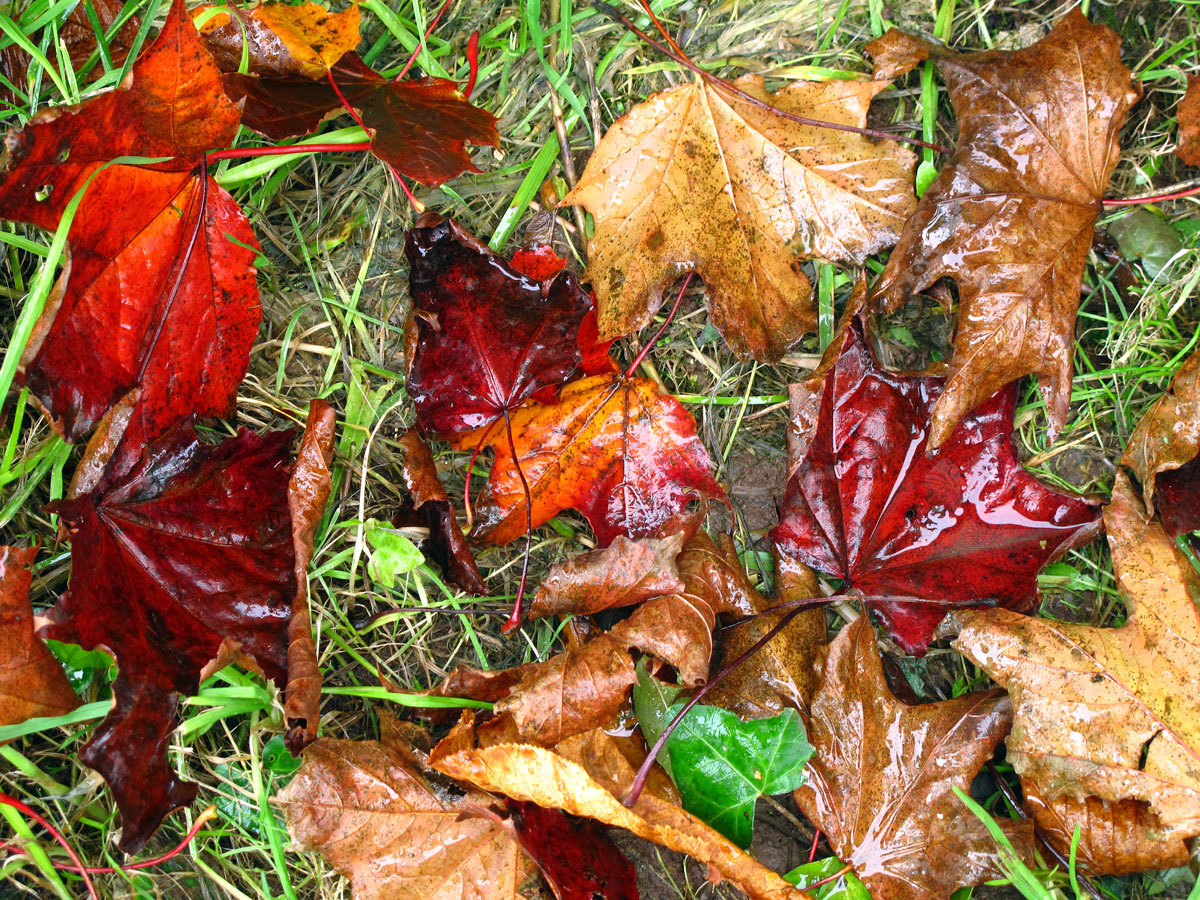 At the far end of the Arboretum a track leads off to the right just before the entrance to the park at Higher Lodge near an apple pound. Traditionally horses were made to go round and round this apple pound with a ‘runner’ stone to crush the apples that were then turned into cider – an important ingredient for the Devon farm labourer.

Following the track downhill will take you under the Old Totnes Road to the Lakes. This was the route that the Lord and Lady of the Manor would have used to get between the village and the court without the villagers’ knowledge.

At the point where the path goes left for the lakes turn right for a moment to take a look at the Gamekeeper’s Cottage. Originally there was a warren nearby and this was the Warrener’s cottage, but by the early 19th century pheasant shooting became a popular pastime, and the cottage was occupied by the gamekeeper. The timber latticework on the edge of the cottage is where the game was hung to dry, and it wouldn’t have just been pheasant but pigeon, duck and rabbits as well. The last gamekeeper left the cottage in 1936.

The pictures above were taken before a recent restoration project got under way, and if you retrace your steps back to the path that will take you around the lakes, I’ll briefly explain why the lakes are here and why restoration was needed.

They were originally conceived by the monks of Torre Abbey when they took over the lease of Cockington at the beginning of the 13th century, and used purely for stocking them with carp for their dining table. In the mid-17th cent the Mallocks decided to smarten the area up by turning the lakes into ornamental ponds and re-stocking them with carp once again. Surrounding the three lakes, you will see how they also planted many fine trees and shrubs. Since then, the area has become overgrown, with the lakes in dire need of repair. The Green Heart Appeal was launched with the aim of restoring the area to be fit for purpose in the modern day.

The lakes themselves will be used in three different ways. The top lake will be used to catch the sediment that runs off of the fields, the middle lake will become an environmentally sensitive area to encourage dragonflies, frogs and other pond life, and the bottom lake will again be restocked with carp, which will no doubt also attract ducks and waterfowl.

From the bottom lake, continue down the lane towards the Lower Lodge which you will need to walk under to get out onto Cockington Lane. Turn left and head towards the village centre, passing Lanscombe House along the way. Now used as holiday cottages, Lanscombe House was the former Dowager’s House and the site of a former tannery who used the lakes, not for carp, but for soaking cattle hides in.

It’s just short walk along the lane to the village centre, and I think you owe it to yourself to finish off with a cream tea – after all, this is prime cream tea country. There are a couple of popular options in the centre of the village, but I don’t feel guilty in the slightest for recommending the Weavers’ Cottage Tea Shoppe, not just because they do a good cream tea, but also because it’s run by Paul and Karen, a lovely couple who used to supply me with free coffee when I worked in that hut that masqueraded as the Visitor Centre.

One day when I was there, the reigning Miss World, the previous Miss World, and Miss Oceania/Australia dropped in for the obligatory cream tea, and Paul got so flustered serving them that he not only forgot about my coffee, he also forgot to introduce them to me as well. I don’t think I’ve ever forgiven him. On second thoughts, now that I’ve remembered that, I think I’m going to have to recommend Rose Cottage instead – and don’t forget that in Devon it’s jam on top.

30 thoughts on “Cockington – A Walk in the Park”