Berlin’s influence on European and world history during the twentieth century was cataclysmic – but it’s now the 21st and the city is being re-born into a dynamic new capital of a new Germany.

This 24 hour city of 3½m inhabitants (4½m if you include the entire urban area) is an eclectic mix of historical monuments, modern architecture and vibrant nightlife. It is also cosmopolitan, cultural and unorthodox.

It’s possible that some of the city’s classical landmarks may remind you of other European cities but there really is only one Berlin. Surviving relics from World War II may have largely gone but they are not forgotten, and the remaining features from the Cold War are now becoming major tourist attractions.

Since the Berlin Wall came down in November 1989 the city has been in a continual state of upheaval trying to make up for lost time. Building and re-building work has been going on relentlessly around the city, and you will need to check out the latest state of affairs for your destination beforehand if you don’t want to be disappointed by what you might find.

Berlin may be a city of hustle and bustle but about a third of it is composed of woods, parks and lakes and the efficient public transport system can whisk you off out into the city’s countryside suburbs in no time at all.

For the last hundred years Berlin has endured one crisis after another but at last it seems to have turned the corner.

Potsdamer Platz was one of the city’s main hubs prior to World War II but became Nomansland when the wall split the city in two. Today it represents 21st century Berlin, and its modern buildings stand almost defiantly overlooking the city, suggesting that the new united Berlin is here to stay – whatever the future holds.

After 30 posts covering many different locations around Berlin, I’ve decided it was time to say goodbye to this most absorbing city. I haven’t covered everything of course, mainly because my interest in Berlin has always centred around the pivotal role it played in world affairs during the 20th century. With that in mind, I’ve […]

The Berlin Festival of Lights

This week I’ve been sifting through a load of old pictures which is a great exercise in procrastination if ever there was one. Most of them will never see the light of day outside of our own four walls because they were taken in pre-digital days in the form of prints or transparencies, but here […] 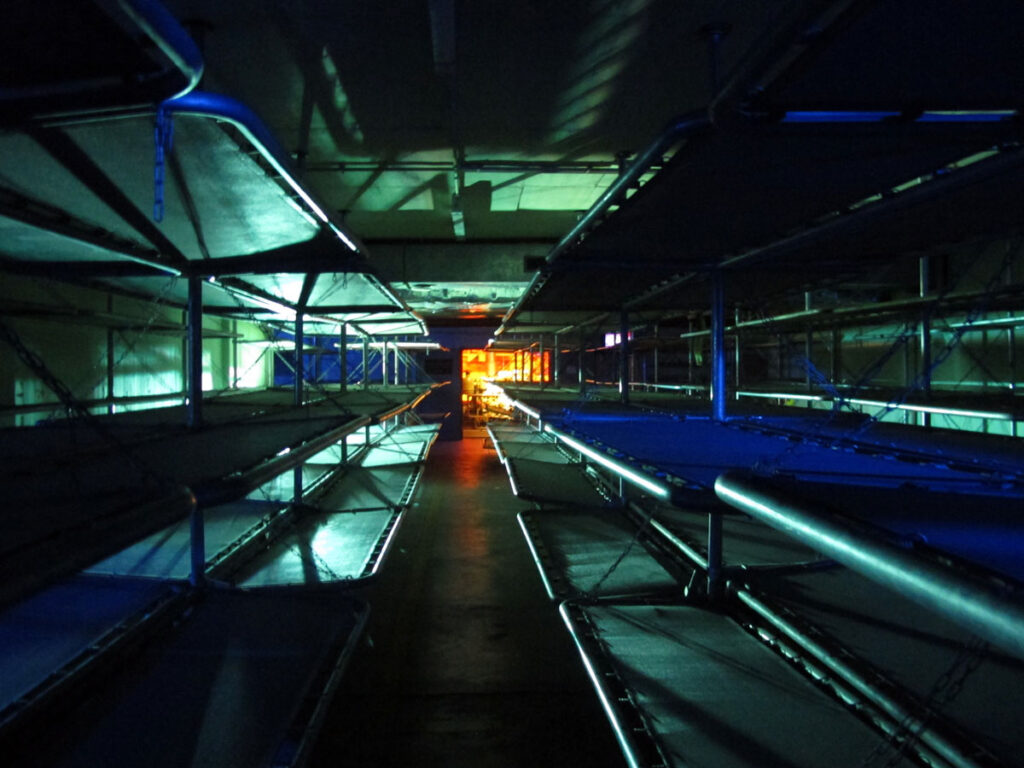 Berlin is a city that has always fascinated me in a way few other cities have: I’ve always thought that history can teach us so much about the way we humans have adapted to our world at different stages of our evolution, and during the 20th century Berlin held centre stage. My posts on Berlin […] 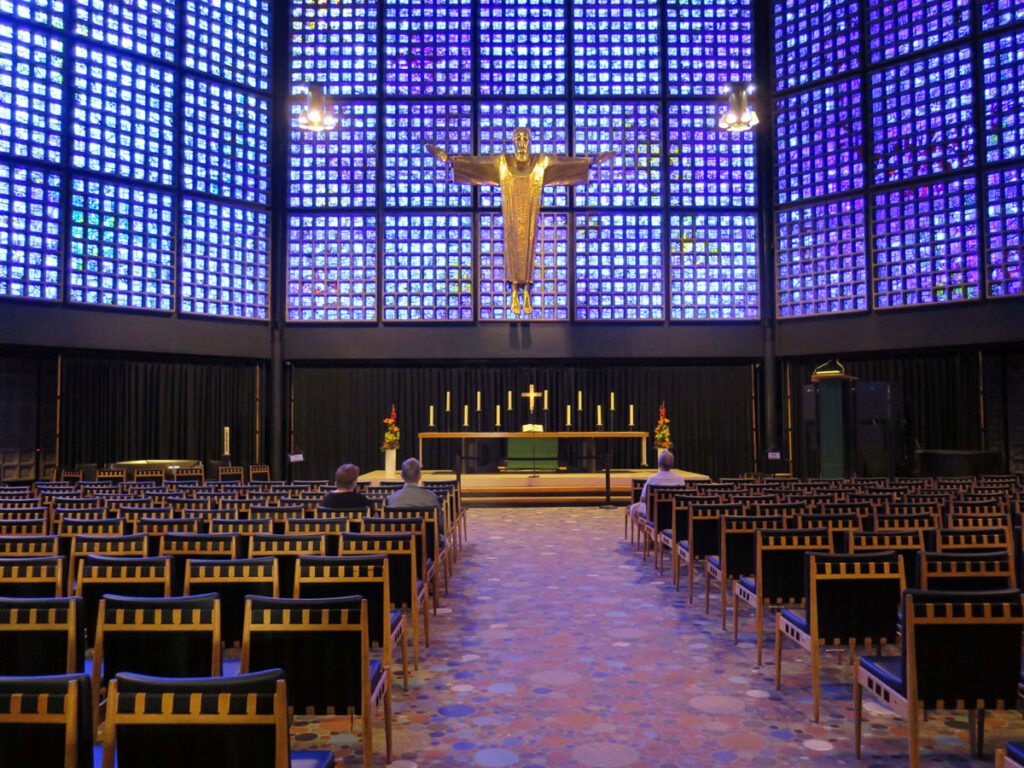 In its attempt to atone for the horrors inflicted on the world by the Nazis, Berlin has gone out of its way to confront its past with monuments of what it sees as reconciliation. For example, the Memorial to the Murdered Jews of Europe covers an area in the centre of the city which was […]

A walk along Karl Marx Allee may not be everybody’s idea of a morning or afternoon out in Berlin, but if the old communist GDR ideology fascinates you as much as it does me, then try and find a gap in your itinerary to come and take a look at this grand East German boulevard. […] The Ministerium für staatssicherheit, or Stasi for short, was the GDR Ministry of State Security. It operated from 1950 until 1989 with the headquarters located in the Lichtenberg district of Berlin. Its main purpose was to ensure that the population adhered to the strict Marxist-Leninist ideology of the GDR, and in most cases, they conformed […] 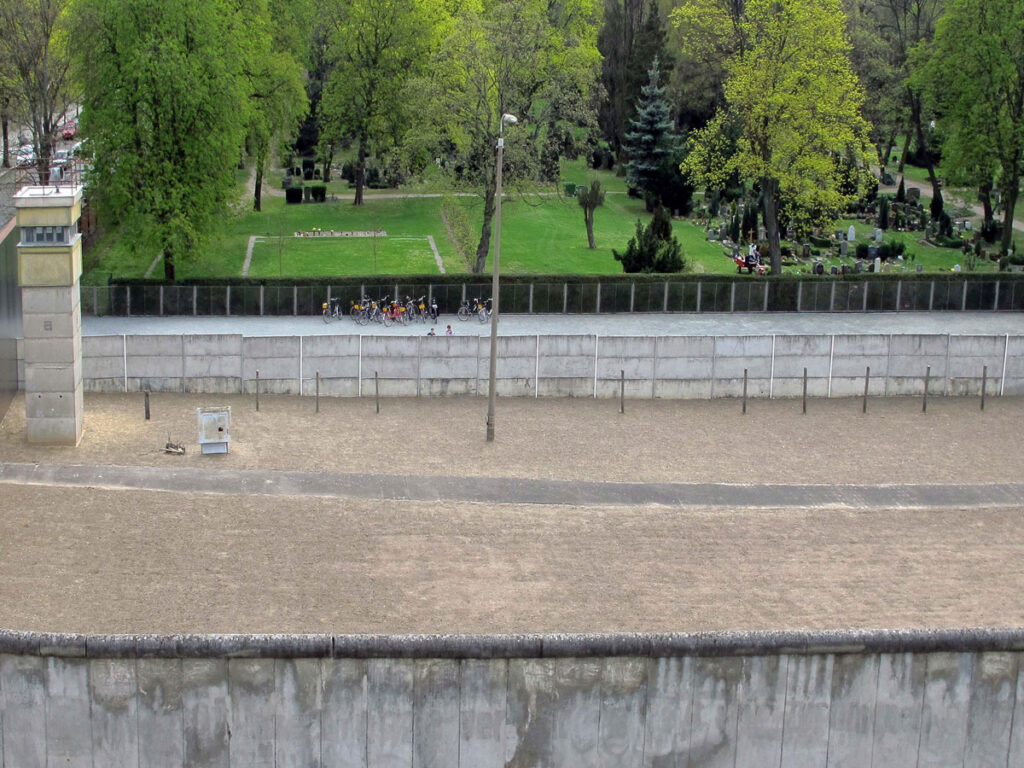 Anyone interested in finding out what life was like living with the Berlin Wall should come to Bernauer Strasse. The street was right on the dividing line between East and West and is now part of the Berlin Wall Memorial, an open-air exhibition (if that’s the right word) which includes a Memorial, Reconciliation Church, Documentation […]

East Side Gallery and Oberbaum Bridge

The section of the Berlin Wall that still remains between the Oberbaum Bridge and the Ostbahnhof on Muhlenstrasse is the longest open air art gallery in the world. In German it’s called the Kunstmeile, which in English translates as Art Mile. The East-West border along here during the Cold War was the River Spree and […] 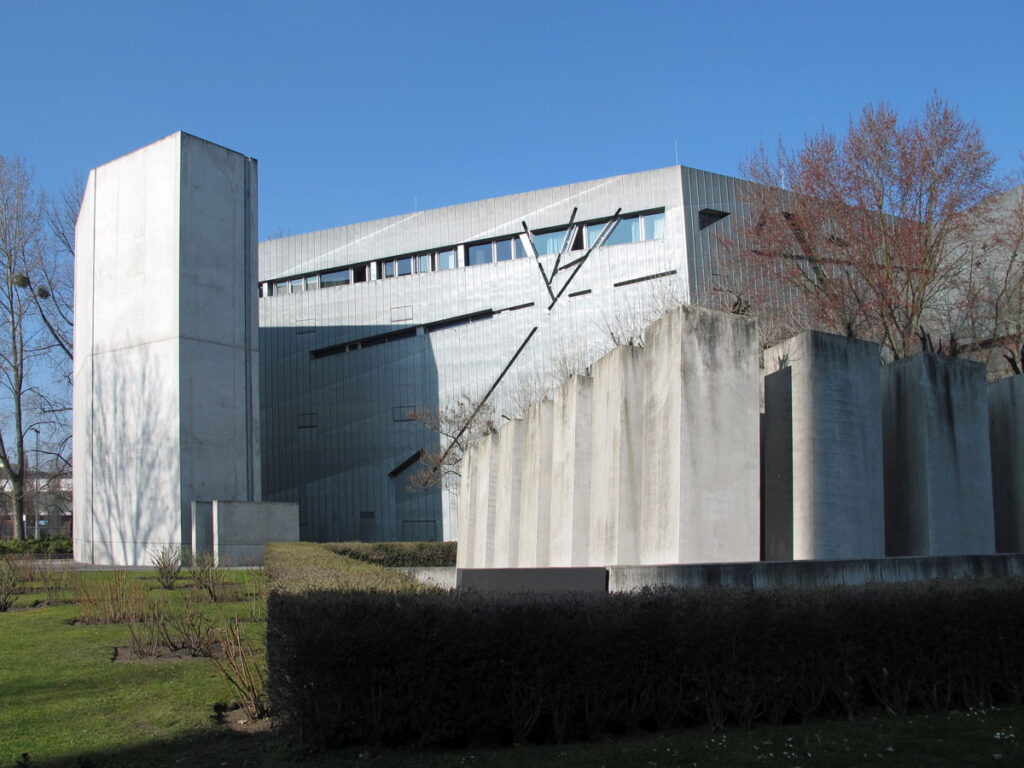 This museum, designed by the world famous Polish-American architect, Daniel Libeskind, is a mixture of both old and new. Entry is through the former Collegienhaus, a fine Baroque building which dates back to 1733-1735, but I suspect most people are anxious to see Libeskind’s modern addition. Anybody who is familiar with his work won’t be […] House of the Wannsee Conference

On 27th January 1945 Auschwitz-Birkenau concentration camp was liberated by the Soviet Red Army, and each year since 2005 the date has been commemorated as International Holocaust Remembrance Day. This blog is dedicated to the memory of all those who died during this inhuman period of European history. The Holocaust is largely remembered for the genocide […]

For someone who didn’t even like sport, it might seem somewhat surprising that Adolf Hitler was able to stage one of the most successful, albeit controversial, games in Olympic history; they were so successful in fact, that the format has been followed in much the same way ever since. The background to the 1936 Berlin […] Between October 22nd – 28th 1961 the eyes of the world were focused on Checkpoint Charlie, a crossing point between East and West Berlin during the years of the Cold War. A stand-off between American and Soviet tanks could have resulted in quite possibly, WWIII, but both sides had the sense to realise the consequences […] 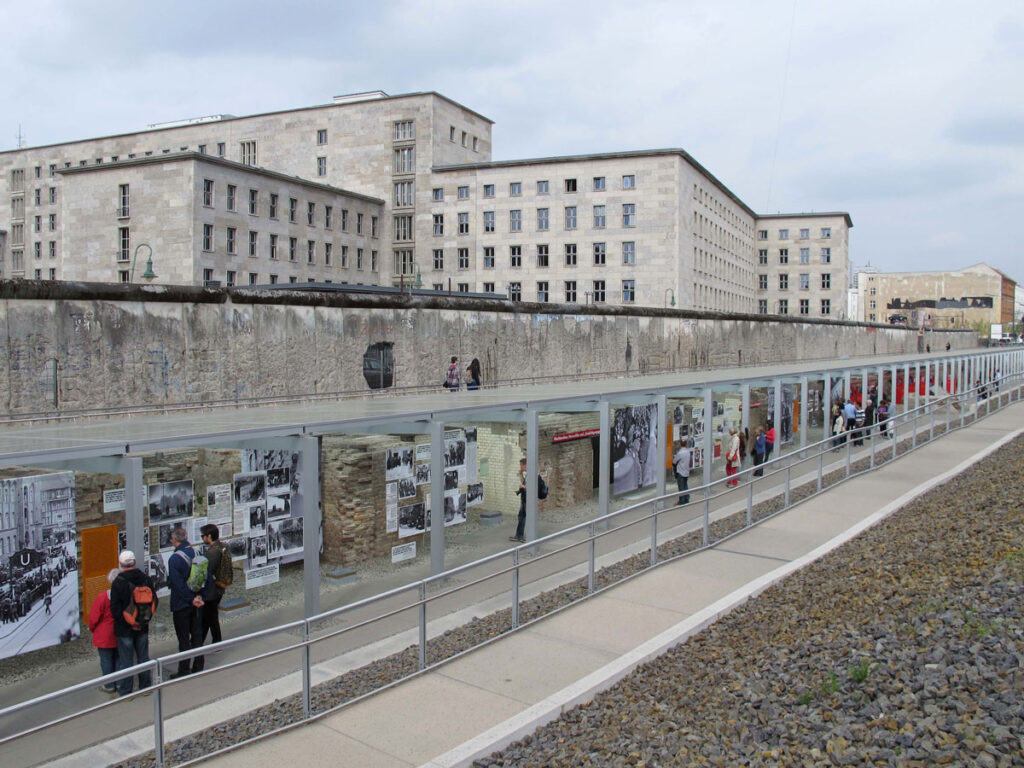 The Topography of Terror

The Topography of Terror is both an outdoor and indoor museum on the site of the former Nazi headquarters for the Gestapo and SS. It lies at the intersection of Wilhelmstrasse and Niederkirchnerstrasse, and covers the area once occupied by the Prinz-Albrecht Palais. The area around Wilhelmstrasse was the main centre for the Nazi administration, […] 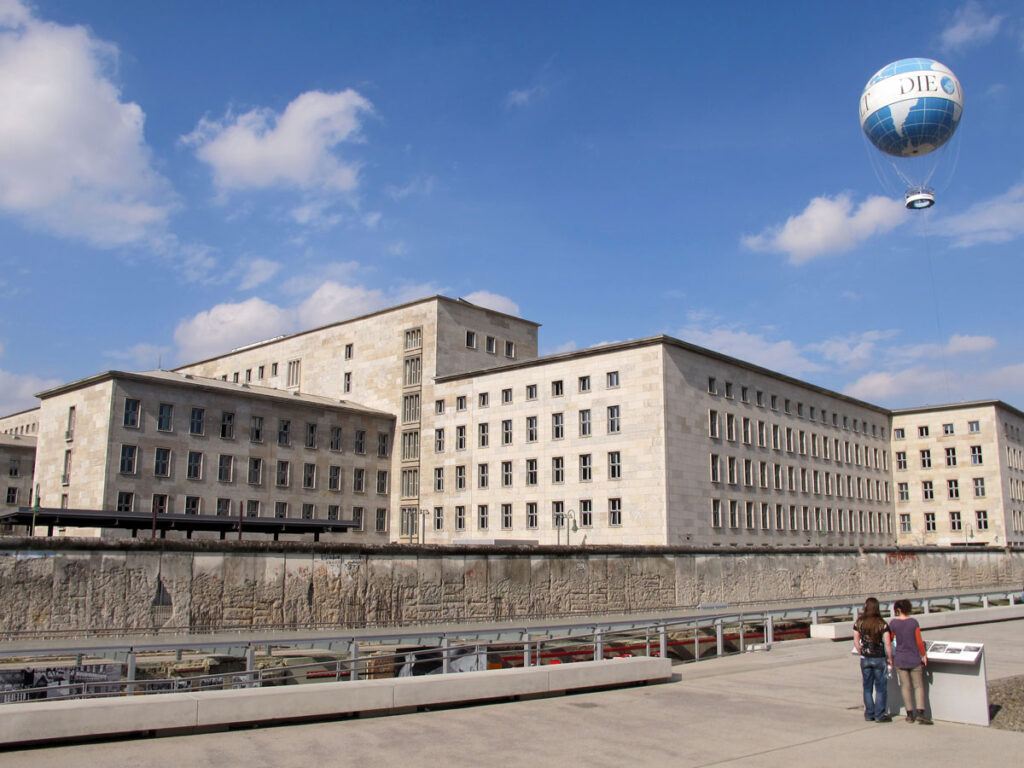 If the outcome of WWII had been different, and London had been beaten into submission instead of Berlin, then imagine if you can, what Whitehall would look like now: Wilhelmstrasse is (or was) Berlin’s ‘Whitehall’. The road runs for one and a half miles between the Marschallbrucke on the River Spree down to Hallesches Tor […] 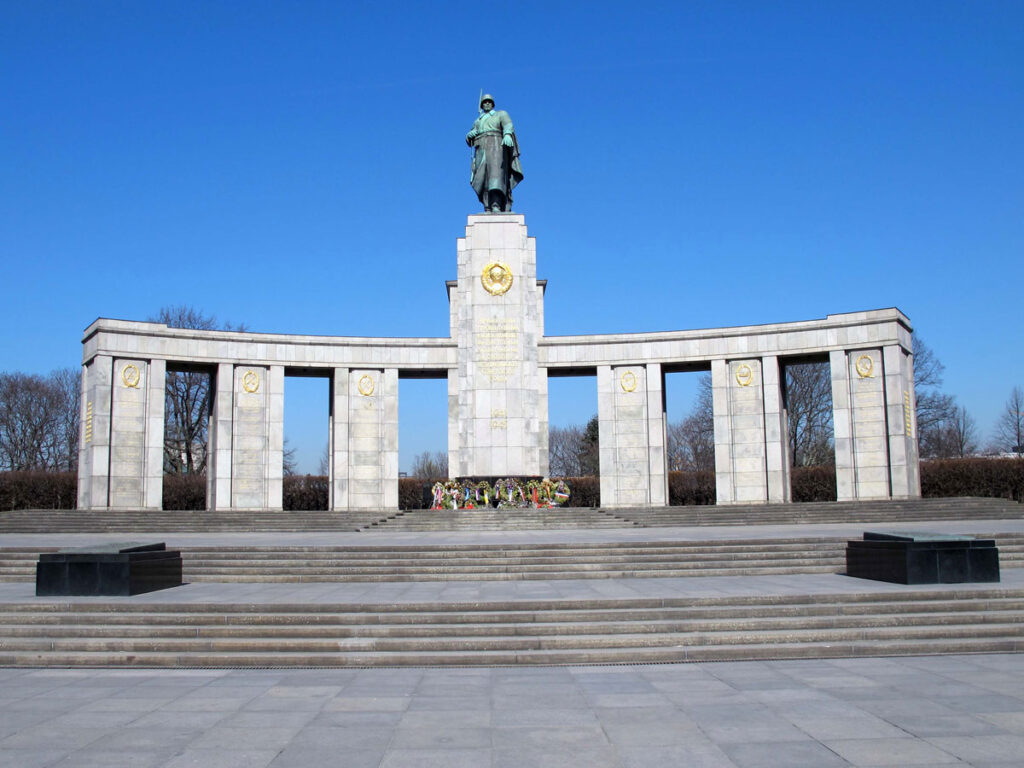 There are three Soviet War Memorials in Berlin, one in Treptower Park, another in Pankow, and this one in the Tiergarten, which is probably the most well-known of the three, and unveiled just two months after the fall of Berlin to the Soviet army in May 1945. The Battle for Berlin cost 80,000 Soviet lives […] In the middle of The Tiergarten at Grosser Stern, stands the Siegessaule, or Victory Column, and if you’ve got €3 – and the energy – it’s possible to climb the 285 steps to the viewing gallery that sits just under Victoria, the Roman goddess of Victory. The monument was designed by Johann Heinrich Strack, and […] 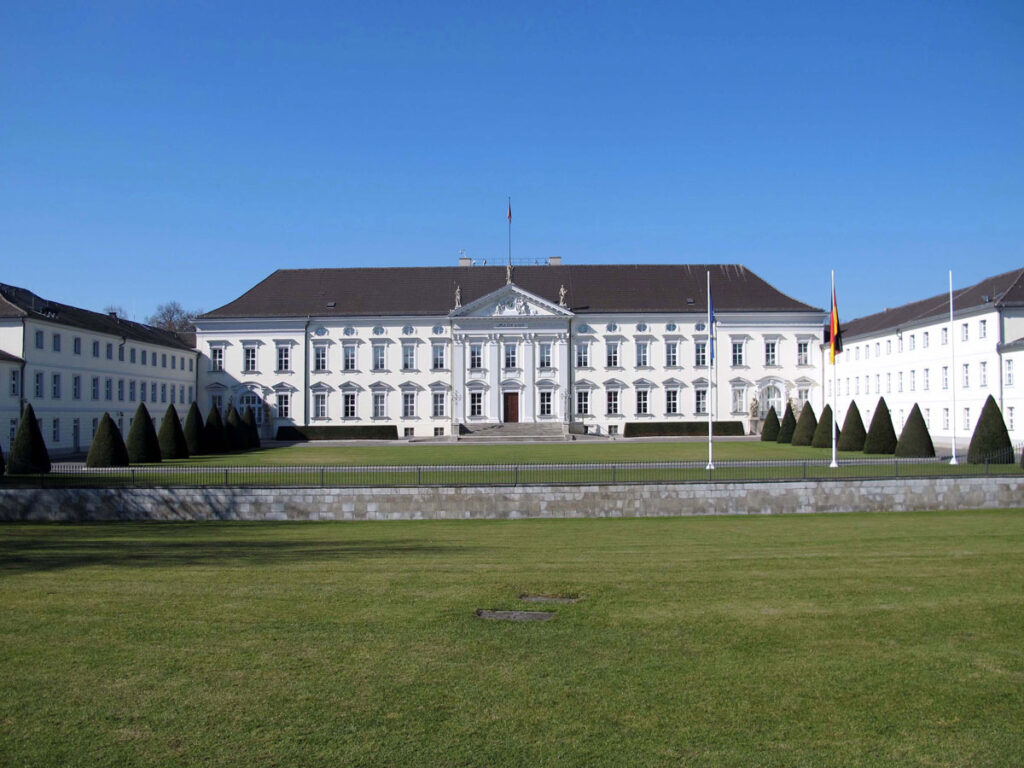 The official German name for the park known as The Tiergarten is Grosser Tiergarten, which helps to distinguish it from the district of the same name. This huge park in central Berlin covers an area of some 520 acres roughly enclosed by the River Spree on its northern edge to the Tiergarten Strasse in the […] 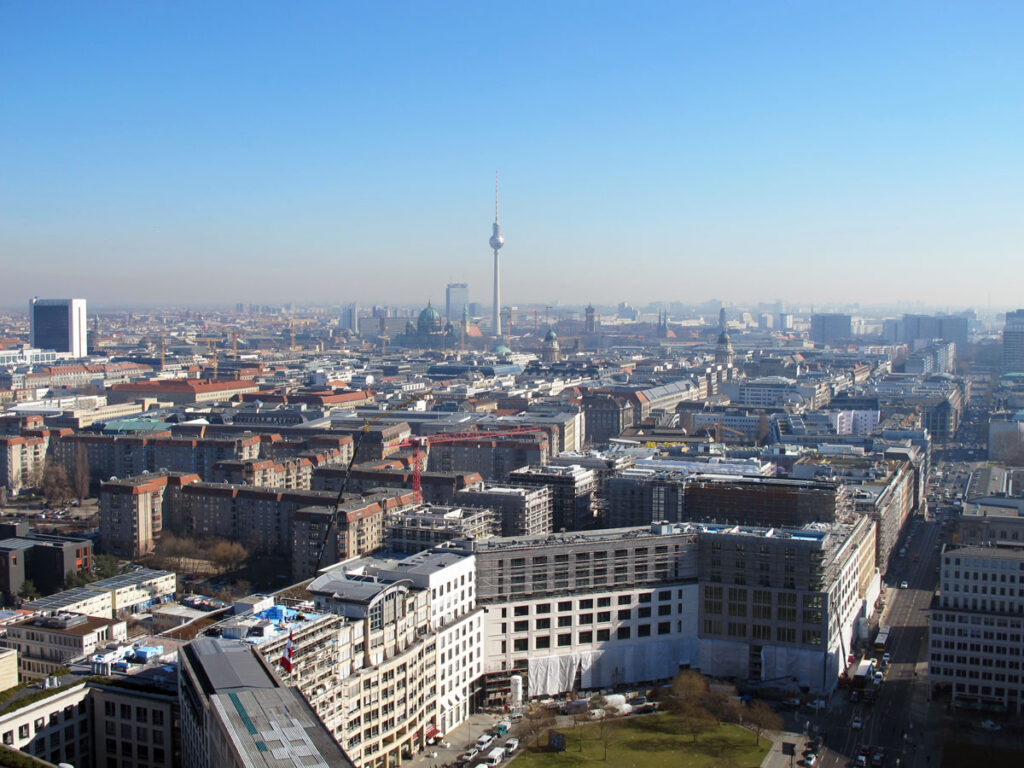 Kollhoff Tower stands at Potsdamer Platz 1, opposite the Sony Center and is named after its architect, Hans Kollhoff. In contrast to the other glass and steel structures in the square, the building is constructed out of peat-fired bricks with a design more reminiscent of a New York skyscraper. It soars 100 metres up into […] With the collapse of the Berlin Wall, the redevelopment of Potsdamer Platz must have been an architect’s dream. The square was divided up into four separate areas which were to be redeveloped by four different developers, one of which was the area now occupied by the Sony Center. During the ‘Golden Twenties’, the site was […]

At a point where five roads converged at the old Potsdam Gate, Potsdamer Platz became the busiest and most recognized intersection in Germany – if not Europe. It became so busy that Europe’s first recognised traffic lights were installed in 1924 to help keep things moving. Its heyday was during the Roaring Twenties, when film […] 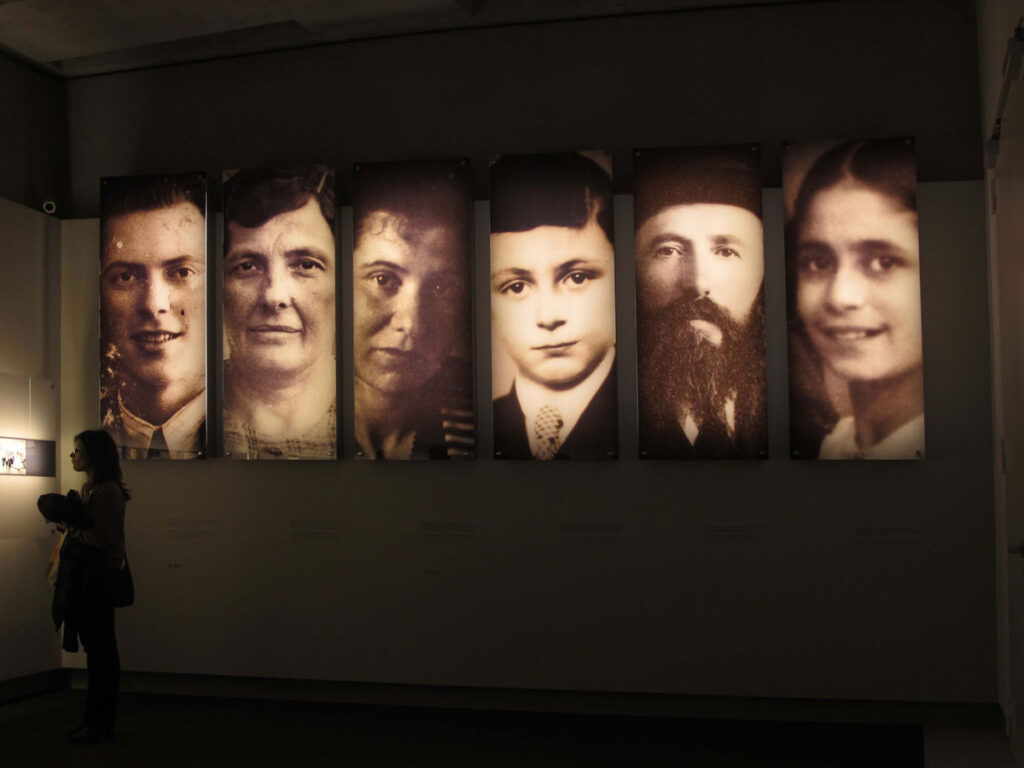 Memorial to the Murdered Jews of Europe

Berlin is a city that has seen many contentious projects over the years but The Memorial to the Murdered Jews of Europe has to be one of the most controversial of all. It wasn’t just because it covers part of the site where Nazi propaganda minister Joseph Goebbels had his office, but for a variety […]

Alexanderplatz, or Alex, as it’s known to Berliners is a windswept pedestrianised plaza doubling up as a meeting point and transport hub in what used to be East Berlin. It was the downtown centre for the locals when it was behind the Iron Curtain, and now one of the main focal points for the united […]

At 368m, Berlin’s TV Tower is the tallest structure in Germany, so there’s no excuse for not seeing it. There’s an enclosed viewing platform at 203 m, and fortunately you don’t have to climb up the 986 steps because one of the two lifts will whisk you up there in just 40 seconds. It’s […] 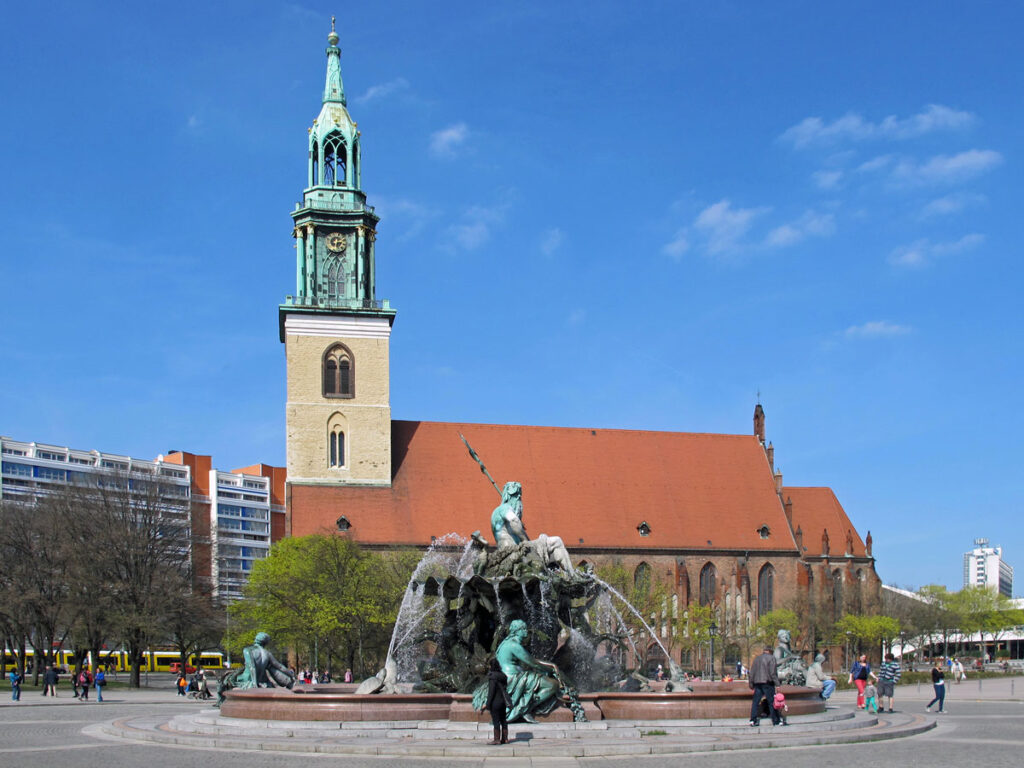 The area on the north-east side of the Spree around Nikolaiviertel and Spandauer Str was the oldest part of Berlin. I say was because the events of the Second World War virtually wiped the whole area off the face of the map. Very little remained intact, and although the Nikolaiviertel district was put back together […] Berlin’s protestant cathedral was only forty years old when it was bombed by the allies in 1944, and it wasn’t completely restored until 2002. It’s never even had a Bishop’s chair – or even a Bishop – and yet it should be on every visitor’s list of things to see in Berlin. Situated in the […]

The German Historical Museum’s permanent exhibition is located in the early 18th cent Armoury building on Unter den Linden, with a modern extension housing temporary exhibitions in the Exhibition Hall at the rear. The collection of Germany’s important historical artefacts has taken a few twists and turns along the way, but with reunification came […] 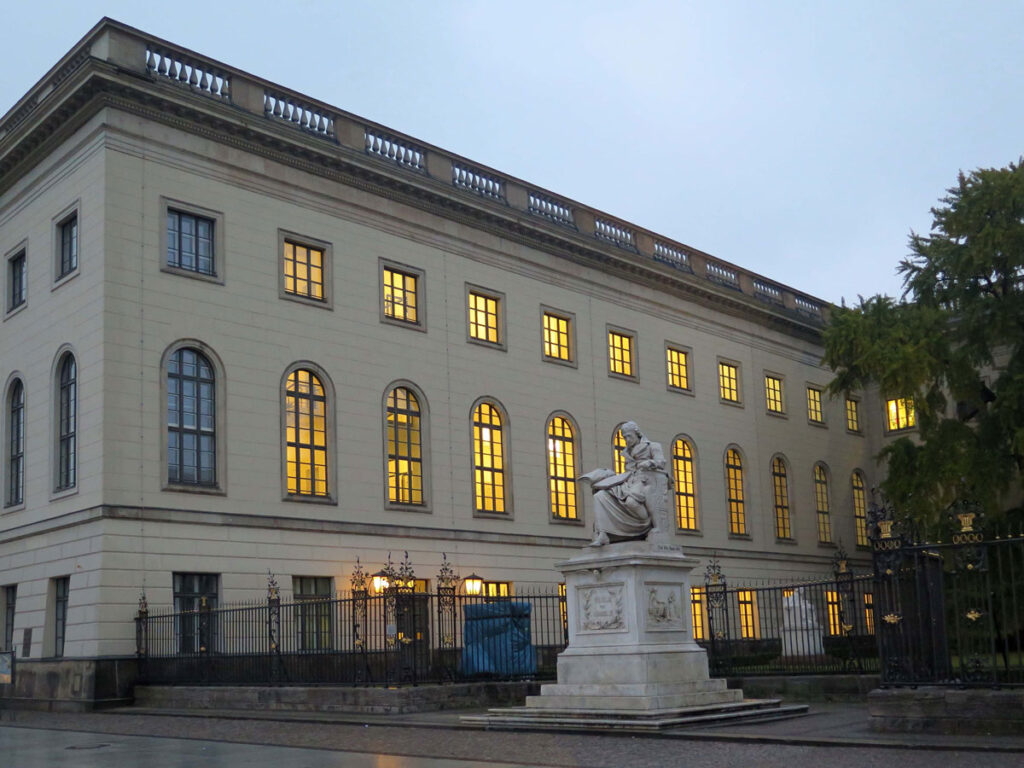 This famous university isn’t a visitor attraction in the true sense of the word, but its historical background makes it more than worthy of a review. The main building is situated in Unter den Linden opposite Bebelplatz where the Old Library faces the Berlin State Opera House. Outside the main building are two statues. […]

With the collapse of the Berlin Wall in 1989, and the subsequent re-unification of Germany in 1990, an opportunity arose to bring the Federal government back to where it belonged in Central Berlin. I don’t suppose it took much deliberation as to where to locate the new parliament. The Reichstag may have been battered […] 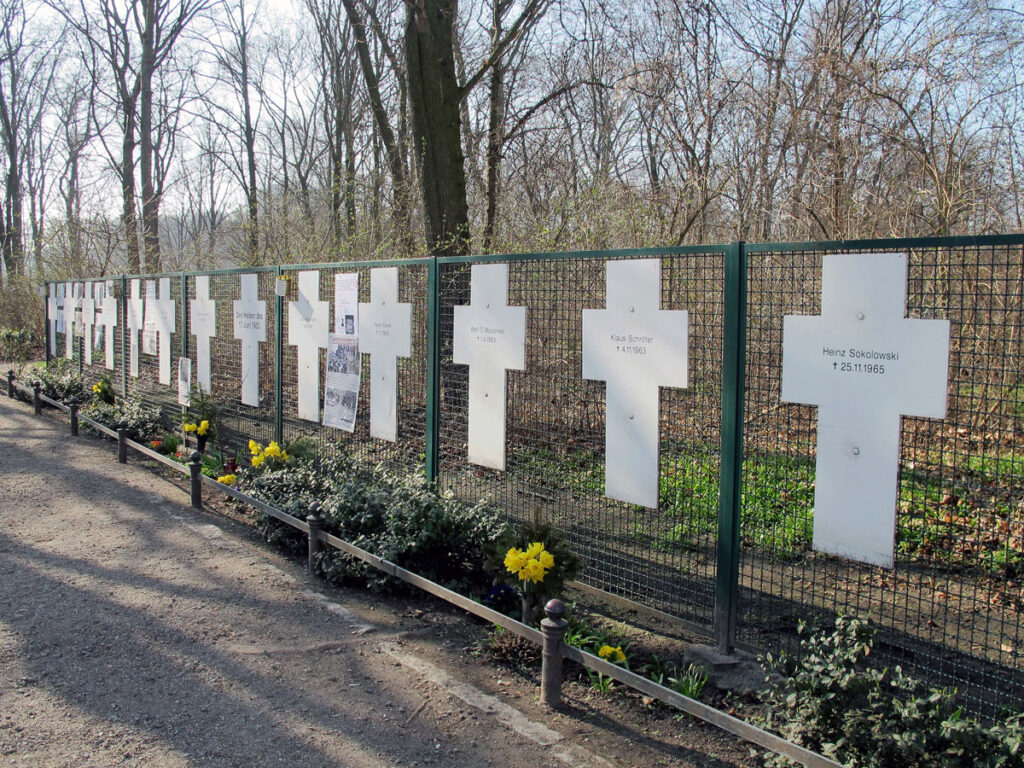 Unofficial Memorial to Victims of the Berlin Wall

Anyone who walks between the Brandenburg Gate and The Reichstag can’t fail to notice 14 white crosses spread along a fence next to the Tiergarten. These crosses are obviously a memorial to those who died trying to get across the Berlin Wall, but they’re not supposed to be here – but why not? It’s […] 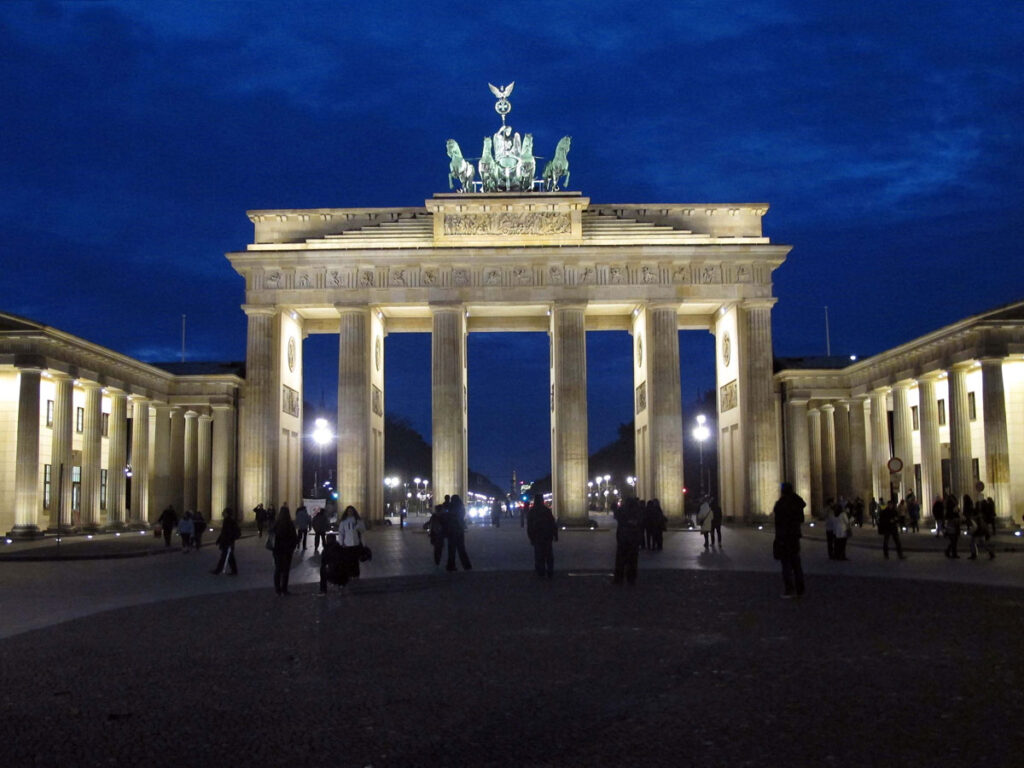