Chapel Street and the Pirate of Penzance

Market Jew Street may be the main street in Penzance, but historic Chapel Street is without doubt my favourite. It leads from the harbour right up to the Greenmarket in the centre of town and has an eclectic mix of architecture and some intriguing maritime history.

Like the rest of Penzance, Chapel Street was almost razed to the ground in 1595 when a Spanish raiding party set fire to the town in retaliation for the defeat of the Spanish Armada in 1588. One of the buildings that did manage to survive was the Turks Head which has supposedly been here since 1233. According to the pub’s website it gets its name from when the Turks invaded the town around the same time, and was the first pub in the country to be called by that name.

Whatever the truth is, it’s definitely one of the oldest buildings in Penzance – and it’s a well-known fact that Penzance was raided by corsairs from the Barbary Coast from the 16th century onwards. In 1625 it was recorded that 60 men, women, and children were taken from a local church, no doubt to be used as slaves, as was normally the case, by these Mediterranean pirates.

I don’t think that there can be any connection between the pirates of North Africa and the building at the top of the street known as the Egyptian House because it wasn’t built until the 1830s.

Originally two cottages, they were transformed in 1835 by a local man, John Lavin, who was a keen mineralogist. This flamboyant building was built in a style that was in fashion after Napoleon’s campaign in Egypt in 1798, and used to house Lavin’s collection of minerals. Today it is owned by the Landmark Trust who rent it out as holiday accommodation.

Speaking of Napoleon’s exploits; in the Union Hotel opposite, news was announced of Nelson’s victory (and death) over Admiral Villeneuve’s fleet at the Battle of Trafalgar to an unsuspecting audience by Mayor Thomas Giddy before reaching the rest of the world.

It wasn’t supposed to happen like this; HMS Pickle was on its way back from Trafalgar to Falmouth with the news, but was intercepted by local fishermen, who blabbered it out before HMS Pickle was able to land at Falmouth and carry the news officially to London.

Many of the buildings in Chapel Street were rebuilt during Georgian times, mainly of granite, but down at the other end of the street are some that are made of brick which are referred to as the Rotterdam Buildings.

They’re not in the Dutch style or anything, it was just that they were built at their expense thanks to a local privateer who used his ill-gotten gains to construct these buildings in what was considered to be a better building material at the time.

In one of these houses (No. 25) lived Maria Branwell, the mother of Charlotte, Anne, Emily and Branwell Bronte.

Just a short distance away at the crossroads with Abbey Street is the Admiral Benbow pub. Contrary to what many people think, the pub isn’t that old, as it was only conceived in the 1950s and built out of two cottages. The idea came from a man called Roland Morris.

Roland Morris was a man who has been called the country’s last great buccaneer, a label he would have been proud of.

Born in 1907, he spent his whole life in Chapel Street, which no doubt meant that he would have had a close association with the sea from an early age.

As a teenager he stumbled upon an old leather chart soaked in oil, which suggests that what I’m about to tell you has come straight out of a fictional book – but there’s nothing fictional about Roland Morris.

He kept the chart secret for years, possibly because, as strange as it may sound, Roland Morris detested the sea. He lost one of his sons to it, and maybe that was perhaps one of the reasons that he wanted to get even with it. He wanted to ‘restore to man what the sea had taken from him’.

The chart showed the whereabouts of the wreck of HMS Association, which sank off the Western Rocks of the Isles of Scilly in 1707.

The Association was the flagship of Sir Cloudesley Shovell’s fleet that had been involved in besieging Toulon in the War of the Spanish succession. It wasn’t a particularly successful mission, and it became even less so on its return to British waters.

Stormy weather forced the fleet off course, and navigational errors saw four ships come to grief on the Western Rocks – Her Majesty’s Ships Firebrand, Romney, Eagle, and Association. Between 1400 and 2000 sailors drowned, making it one of the worst disasters in British naval history.

Sir Cloudesley Shovell himself perished in the disaster, but his ship was full of Spanish treasure, and this treasure lay on the seabed for more than 250 years.

The official recognition for finding the wrecks is given to Royal Naval divers, but other sources will tell you that Roland Morris was the first to find them – along with the treasure.

Another shipwreck discovery by Roland Morris, also in the Scilly Isles, was that of the Colossus which sank in 1798 with a valuable collection of antique Greek vases.

The collection belonged to Sir William Hamilton and his wife Emma, who were friends of Lord Nelson (Lady Hamilton especially so).

Naples, where Lord Hamilton was ambassador, was under threat from Napoleon’s advancing armies and the couple fled to Palermo along with the King and Queen of Naples. With Nelson’s help their collection was to be transported back to Blighty via Algiers and Lisbon on a fleet of ships led by the Colossus. On the way back the fleet got split up, which was fortunate in a way, because it meant that not all of the antiques ended up on the seabed off of the island of Samson.

Needless to say, these underwater activities by Roland Morris and his team, led to criticism by some and conflict with others.

One of the establishments he crossed swords with was the National Trust who issued an injunction to stop him snooping around a cove near Gunwalloe on the Lizard Peninsula.

Silver Spanish dollars have been sporadically washed ashore, earning it the nickname of Dollar Cove. The name of the ship and the year of its sinking differs from whichever source the information comes from, but without doubt there’s treasure to be found here, if someone could only locate it. That someone was Roland Morris.

He knew exactly where the wreck was, but the shifting sands made it nigh on impossible to reveal it, and by implication, also the treasure – so how did he come to own some of these coins? I’ll leave you to work that one out.

Back in Chapel Street Roland Morris set up his own maritime museum where he also restored sea-damaged artifacts. The Admiral Benbow, although further down the street, really became an extension to this museum.

The cottages that he turned into the pub were ideal for the purpose. Like the Turks Head, it had secret tunnels that found their way down to the harbour, which were more than likely used for smuggling. Smuggling was so out of control here at one time, that even the mayor, John Tonkin, was bound over in 1770 for his illegal hobby.

Look for the smuggler on top of the Admiral Benbow’s roof – his gun ready to shoot if any customs official should have the audacity to come too close.

As you can probably imagine, the pub is a veritable treasure trove of artifacts brought up from the seabed, and should be on every visitor’s list of things to see in Penzance. 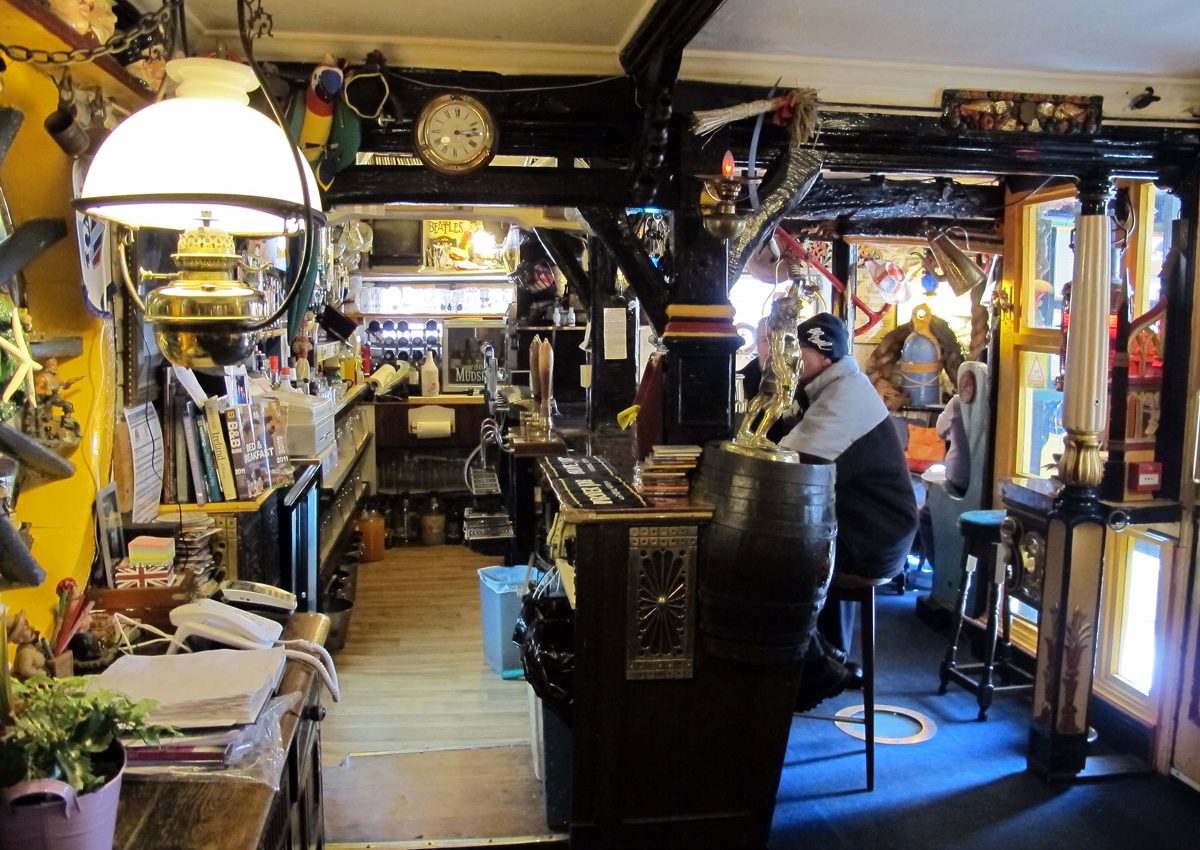 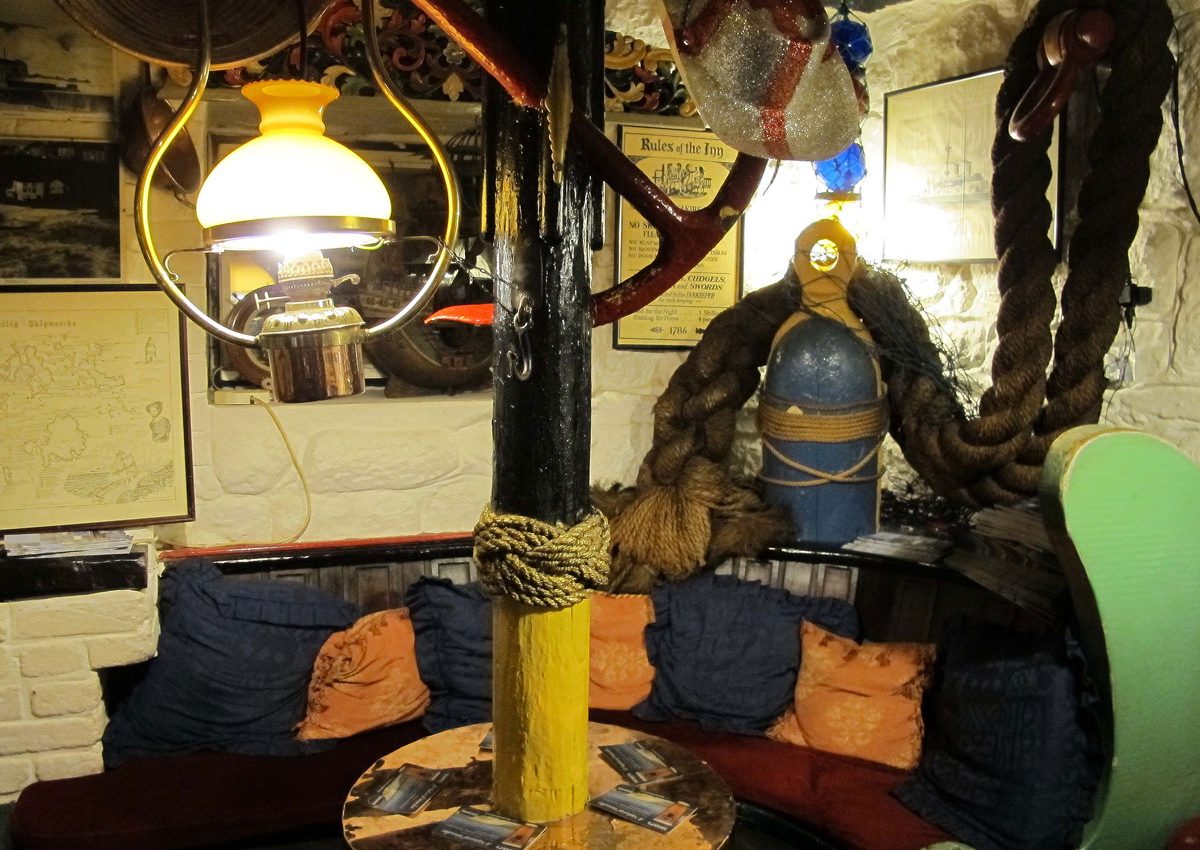 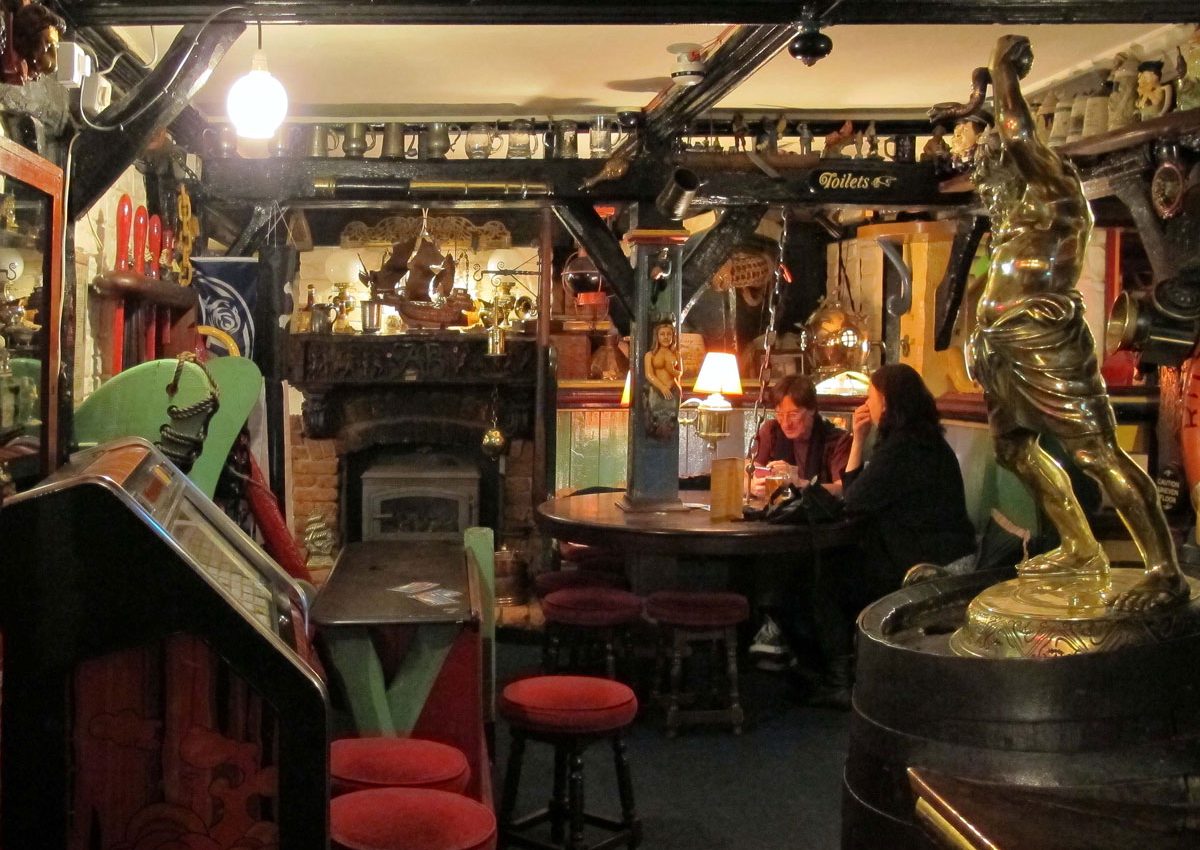 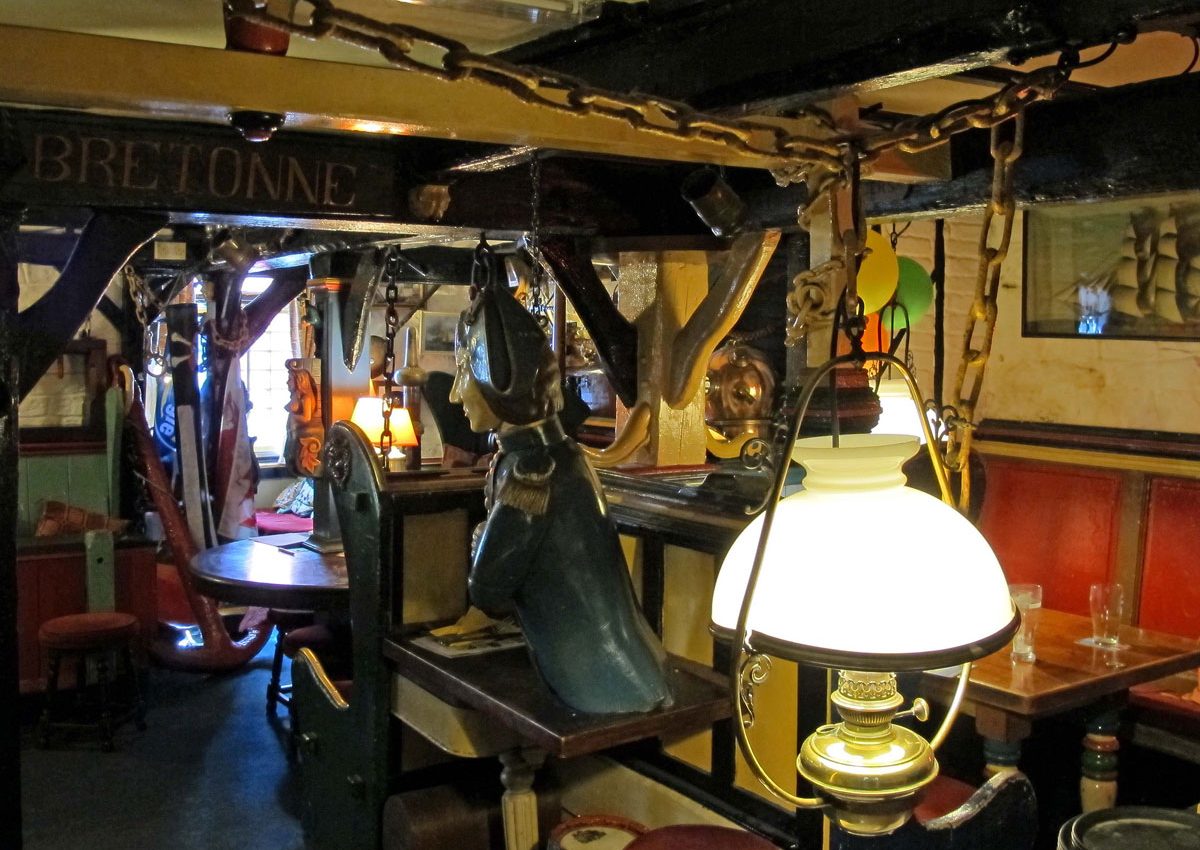 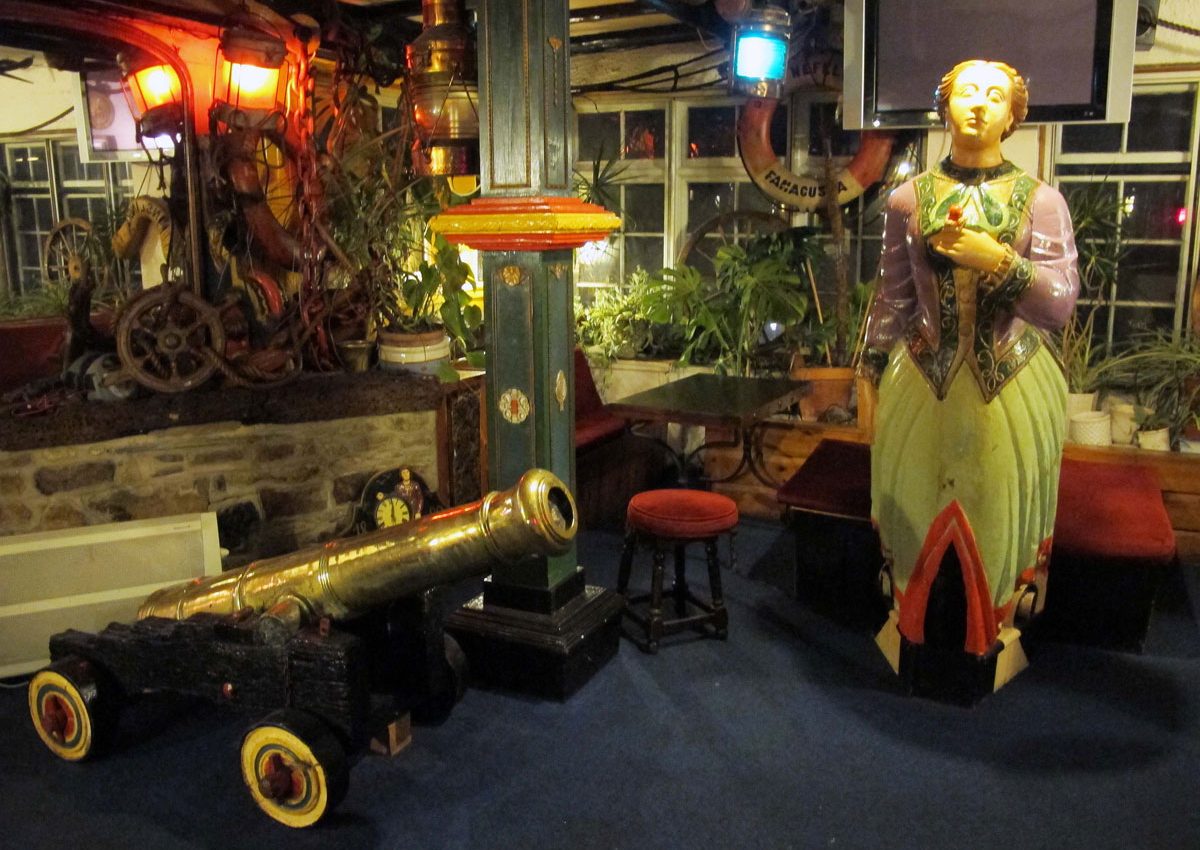 Roland Morris died in 1992 and most of his collection was sold off. Fortunately, the Admiral Benbow retained what was already there, and some of the stuff was bought by the Shipwreck and Heritage Centre in Charlestown, which is somewhere else that should be visited if you have an interest in this sort of thing.

If you’ve enjoyed reading about this modern-day Pirate of Penzance, then there’s a couple of links that you may be interested in:

Ship Ashore is run by Suzy Williams who tells the story of Roland Morris and others from her home in Abbey Slip. The former caravan was turned into a home by none other than Roland Morris himself, and is well worth a visit.

The second link is an old documentary film called ‘Once in a lifetime. The Sea always wins’ – a Yorkshire TV programme directed by Barry Cockroft in 1982.

One last thing. If anyone would like to know what a real-life Spanish Piece of Eight from the Association looks like – here is my very own piece of history. Thanks for joining me on a journey down Chapel Street – and to the bottom of the sea.

39 thoughts on “Chapel Street and The Pirate of Penzance”