Gateshead - A Town Living in Newcastle's Shadow? - Not Anymore

Not too long ago, a foreign tourist was refused entry into the UK because an immigration official didn’t believe the female visitor when she said she was spending a week’s holiday in Gateshead. Although the reaction shown by the official was obviously prejudiced, I don’t suppose too many locals would argue that the town wasn’t actually teeming with tourists at the time, because like much of Tyneside, its prosperity had been reliant on the heavy industries that dominated the landscape from the time of the Industrial Revolution – and even they had gone.

It wasn’t always like that of course: When the Romans built Hadrian’s Wall on the north side of the river, they also built a fort and bridge at Pons Aelius (today’s Newcastle), and there is archaeological evidence to support the fact that they also crossed over the river to Caput Caprae. It was the Venerable Bede who first referred to this name when he wrote his Ecclesiastical History of the English People at St Paul’s Monastery in nearby Jarrow (cAD731). Caput Caprae translates to Goat’s Head and, in this context, means ‘headland frequented by (wild) goats’.

This headland isn’t on the coast but next to the River Tyne, and a topographical map of the area shows the landscape rising up more than 500 feet from the Gateshead Quays to Sheriff Hill, and it was up here that William the Conqueror defeated Edgar Ætheling and Malcolm King of Scotland during the Harrying of the North.

Times have moved on since then of course, and the hills and fells above the river have since become urbanised and no longer part of the County of Durham, but part of the metropolitan county of Tyne and Wear.

Low Fell was, until 1973, the site of coal mining activity at Team Colliery, but these days it’s better known as the location for the iconic landmark known as the Angel of the North. The creator of this massive steel sculpture was Antony Gormley, who used a plaster cast of his own body for the design. Around 33 million people a year see it from the London to Edinburgh A1 trunk road that passes right next to it, and so it’s no wonder that Geordies see it as a beacon welcoming them home, especially when coming up from the south.

Before it was installed in 1998 there were the inevitable, and perhaps understandable concerns about the presence of such a structure looming over the Team Valley, but since then, it has become not only a symbol of Gateshead, Tyneside and the North-east, but also one of the best loved landmarks in England.

Some people may argue that the resurgence of Gateshead began with the construction of the huge Metrocentre shopping mall that was built on the site of the former Dunston power station in 1986, and that could well be true, but for me it was the Angel of the North that really started to draw tourists. As welcome as these new developments were, it was the town itself, particularly the quayside, that needed sprucing up the most.

During the 17th century the medieval alleyways of the quayside started to make way for the new industries that were springing up. Like its neighbour across the river, the quays at Gateshead initially included coal staithes and boatbuilders yards, but as the Industrial Revolution gathered pace during the 18th and 19th centuries, then so did the number of factories: Paper, rope, bricks, tiles, pottery and glass were all manufactured here along the riverside, but there were also ironworks making anchors and chains for the expanding shipyards and even a locomotive works.

Of course, all these industries needed people to work in them and tenements were built to house the workforce. Conditions must have been pretty grim: For example, by the mid-19th century over 2,000 people lived in Pipewellgate, which was the quayside area roughly between where the Tyne and High-Level Bridges are today. If cramped conditions and poor sanitation weren’t bad enough, there were two glue factories and one boiling whale blubber, all of which must have given off an awful stench. No wonder there had been a cholera outbreak in 1831.

Between 1801 and 1901 the town’s population increased by over 100,000, and in 1854 a devastating explosion on the quayside destroyed what was left of the medieval town, but at least it did enable some of the slums to be cleared away and a new quay to be built at Hillgate.

Like so many places in the industrial world, the end of World War I saw a downturn in the fortunes of Tyneside including Gateshead, and by the 1930s things got even worse: One of the lasting memories of those times was the Jarrow Crusade of 1936, in which around 200 unemployed men marched all the way from Jarrow down to London to petition the government for help in saving their local shipyard.

In 1934, the novelist, playwright and screenwriter JB Priestley, wrote English Journey in which he described his experiences travelling around the country during the years of the Great Depression. In his observations about Gateshead, he says that “no true civilisation could have produced such a town”, and adds that it appeared to have been designed “by an enemy of the human race”.

Someone who was probably better equipped to write about the conditions and hardships of South Tyneside during the first half of the 20th century was Catherine Cookson, whose novels have gained a huge fan base with her tales of life in the area during those impoverished times. Although she came from Jarrow, life in Gateshead would have undoubtedly been very similar.

The banner below can be seen in Bede’s World at Jarrow, whose first patron was Catherine Cookson.

By the end of the 1980s the industries that had enticed so many people to Gateshead had all but vanished, and about the only thing that the town was known for was the brutalist Trinity Square car park which featured in the 1971 film Get Carter; but I think it’s time to move on from the negativity of Gateshead’s past and take a look at some of the achievements the town has made since the beginning of the 21st century.

To many people, me included, the construction of the Millennium Bridge is the best thing to have happened to Gateshead. This fabulous looking bridge crosses over the Tyne from the Baltic Centre to Newcastle Quayside, and although some people think of it as yet another Newcastle Bridge, this one is specifically named the Gateshead Millennium Bridge.

Designed by architects Wilkinson and Eyre, it opened to the public on 17th September 2001. Unlike the other bridges over the Tyne this one was built for pedestrians and cyclists only, and is sometimes referred to as the Blinking Eye due to its unique tilting mechanism that allows boats through.

The design includes a pair of steel arches, which every time the bridge opens, clears up its own litter by allowing anything dropped onto the deck to roll into special traps at each end of the bridge, but I’m not going to bore you with any more technical details, and instead just show you some pictures of what it looks like. 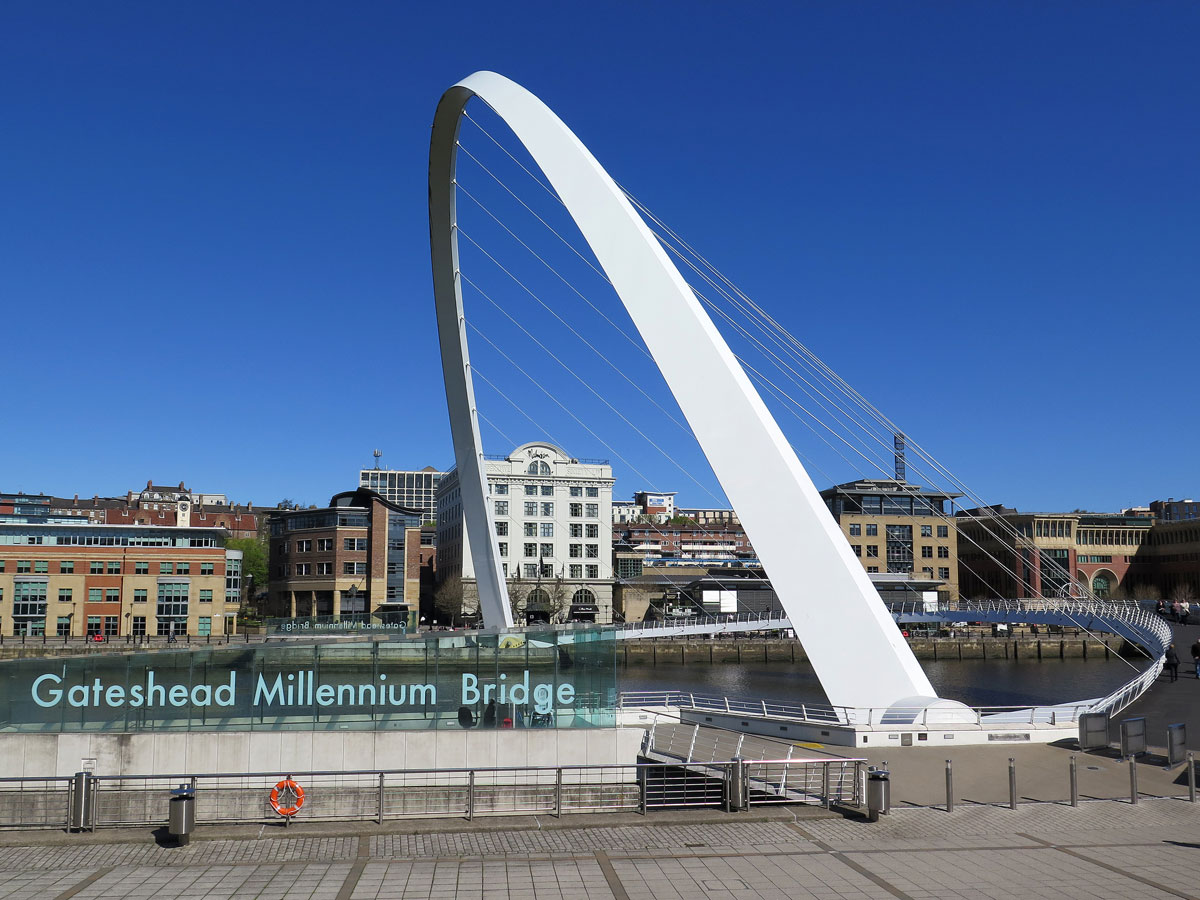 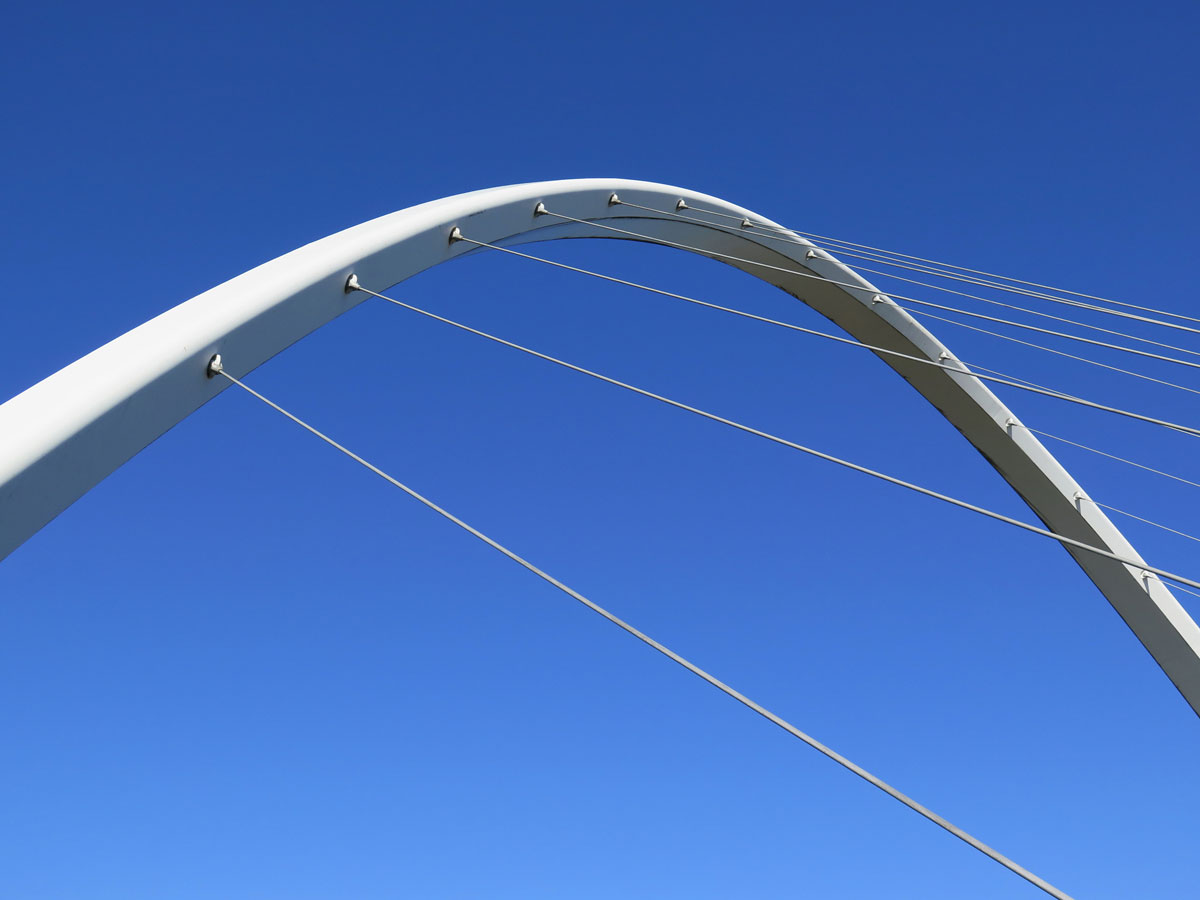 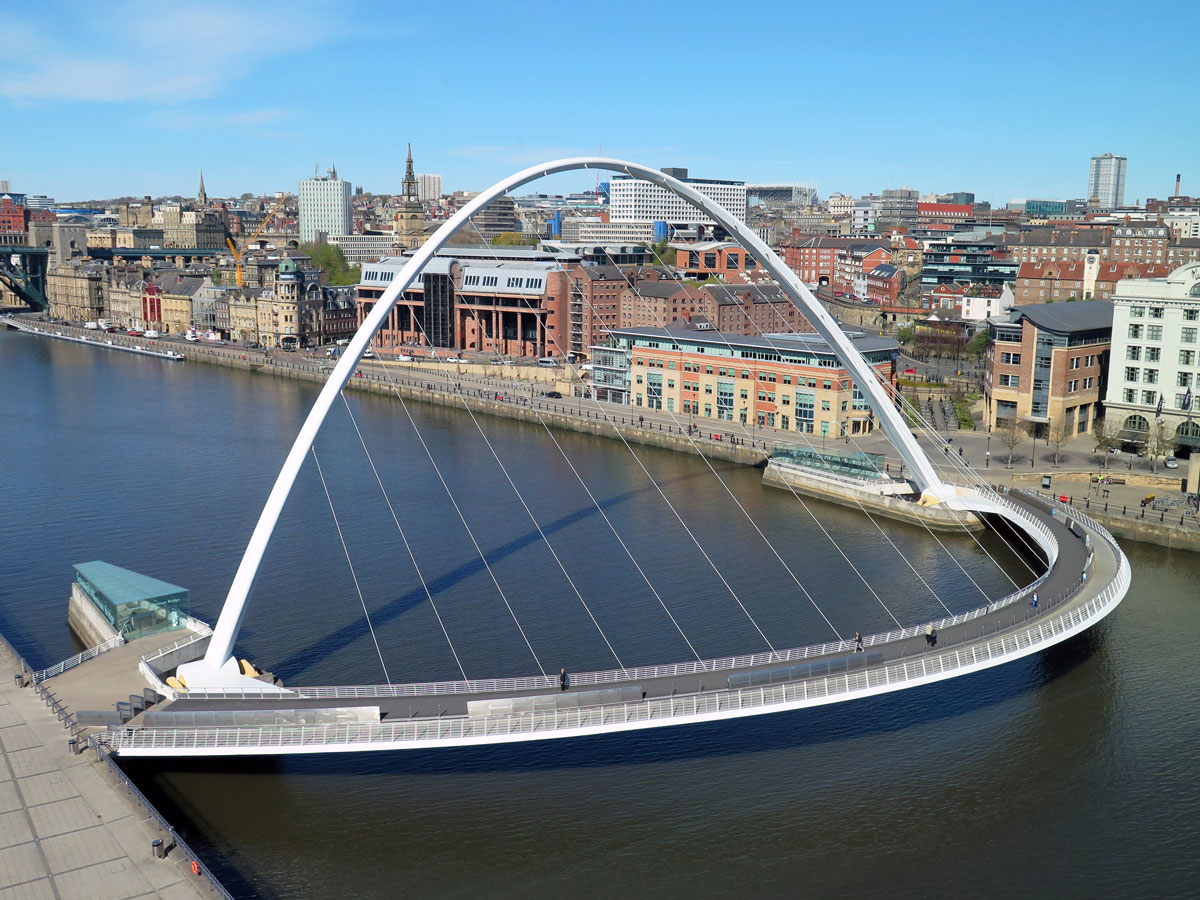 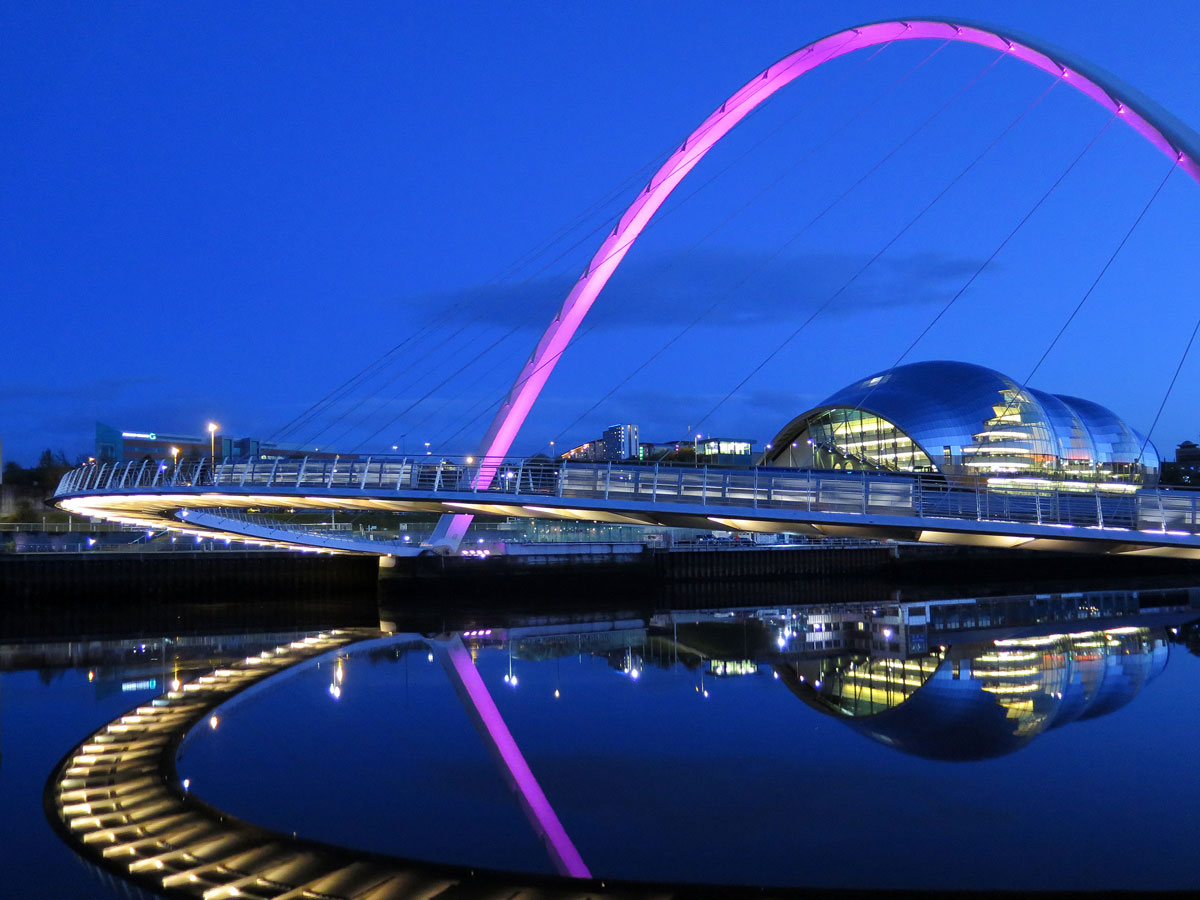 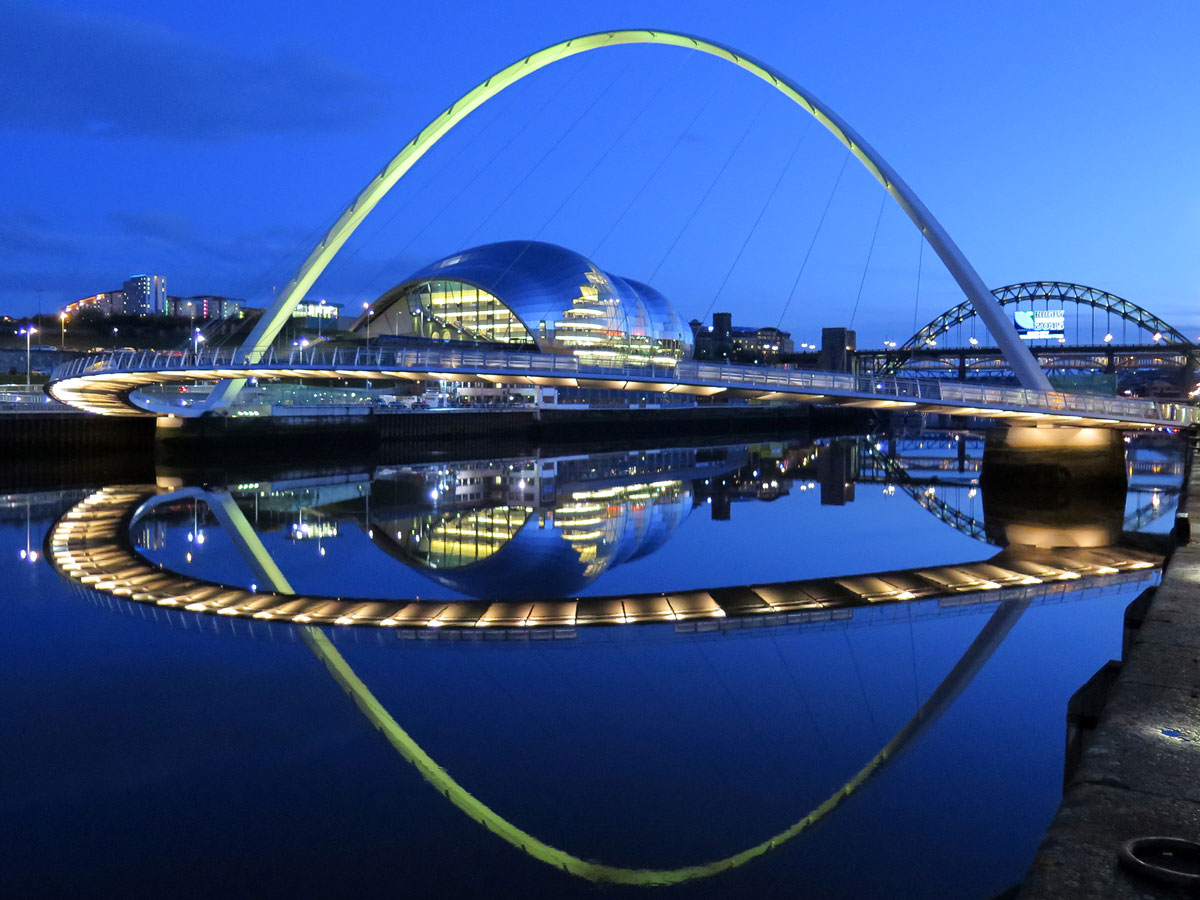 With the new bridge in place, it opened up the Gateshead Quayside to more regeneration, starting with the BALTIC Centre for Contemporary Art.

This former Rank Hovis flour mill opened for business in 1950, but was actually designed in the late 1930s. The silo building where wheat was stored still remains, but a 1957 animal food extension has since been demolished. At its height, the mill employed around 300 people and there were still a hundred working here when it closed down in 1981. Just in case you were wondering, the building didn’t have any trading connection with the Baltic Sea.

In 1994 a design was approved for the conversion of the silo building into an art centre, and on 13th July 2002 it was opened to the public. The building now has six floors, which includes four galleries, an art space, cinema/lecture space, artists’ studios, an archive, library, shop and restaurant. It all sounds very impressive, but what’s it actually like?

Firstly, I think the idea of including a former industrial building into a modern landscape was a brave one, and using it as an art centre appears to be a good choice. That said, you have to have a certain mindset to appreciate the exhibitions that are put on display here. I’ve paid the BALTIC a couple of visits and on both occasions, I was left underwhelmed. Of course, art is highly subjective, and the comment I’ve just made probably says more about me than the venue.

It’s free to go in, and if nothing else make sure that you go up to the viewing gallery to get a bird’s-eye view of the River Tyne, the bridges and Newcastle across the river. Talking of birds and bridges, if you come to Tyneside during the breeding season, you can’t fail to see, hear and smell the kittiwakes that nest on the tiniest of ledges everywhere. It’s unusual for these seabirds to nest so far inland, but I got a good view of them at the BALTIC, and so in a way, I had my own gallery to look at.

No matter what I think about this place, more than 8 million people have now visited 226 exhibitions by 476 artists from 64 different countries since the art centre has opened – and if art is your thing, then make sure that you also visit the shop because they have a fantastic range of books that will ensure your visit isn’t entirely wasted, whatever exhibitions are on.

Whereas the BALTIC is a conversion of an old building, next to the Tyne Bridge is a purpose-built modern glass concert hall called the Sage.

This Foster and Partners designed glass auditorium was opened in 2004 for the Royal Northern Sinfonia, but it caters for all tastes in music, and it was good to see that Folkworks, an organisation that promotes the region’s traditional music also joining the team with educational workshops as well as musical performances. I haven’t been inside, so I can’t comment on whether the facilities are up to scratch, but I can’t believe they wouldn’t be.

The undeveloped area between the BALTIC and the Sage has also recently had plans approved for a “World Class” arena, exhibition centre and hotel. It’s not without its critics because of the height of the hotel, but when all’s said and done, Gateshead is no longer living in Newcastle’s shadow the way it once did.

In 2012 the town had its bid to become a city rejected, but at least the area is now known as Newcastle/Gateshead. It still may not have the same appeal that its illustrious neighbour across the river has, but I don’t think for one minute that anyone who was coming to spend some time in Gateshead nowadays would be refused a visa somehow.

11 thoughts on “Gateshead – A Town Living in Newcastle’s Shadow? – Not Anymore”