I’m sure I’m not the only one, but I absolutely adore islands. They come in all shapes and sizes, and they don’t necessarily have to include coconut palms swaying in a warm tropical breeze over a white sandy beach – which is probably just as well really because the Farne Islands are nothing like that.

There are no palm trees here; in fact, there aren’t any trees at all, and if it weren’t for the wardens who monitor the islands, there would be no humans either.

The only bodies you’ll find lying around in the sun (if it’s out) are Atlantic Seals, who are joined by thousands of sea birds who also call these islands home.

Lying just two miles off the Northumberland coast at its nearest point, the Farnes consist of fifteen islands when the tide’s in, and 28 when it’s not. Separated by the mile-wide Staple Sound, the small archipelago consists of two main groups – the Inner Farnes, and the Outer Farnes, with Crumstone lying east of the main group, and Megstone to the west.

There are several companies that sail out of Seahouses to the islands with various options that will satisfy most tastes – the best-known being Billy Shiels, whose family have taken visitors, including the Queen, out to The Farnes since 1918.

I think I’d be right in saying that most casual visitors to the Farne Islands choose the Grey Seal Cruise for their first experience. It’s a great introduction to the islands and you’re guaranteed to see plenty of these inquisitive mammals. In fact, they’re so nosey that I’m never sure who’s watching who.

There has been a colony of Grey (or Atlantic) seals on the Farnes for at least 800 years and it is one of the most important breeding grounds in the British Isles.

They used to be killed for their oil and skins and by the early 20th century their numbers had diminished to around a hundred or so, but protection has brought their numbers back up to around 4,000 with at least a thousand pups being born every year.

North and South Wamses are two of the main islands where seals give birth to their pups, but I’ve never, for the life of me, understood why the seals think that Autumn is a good time to give birth on theses inhospitable rocks, at what surely must be one of the most precarious times of the year for the youngsters to explore their new world.

Survival rates vary from one year to another, and it must be disheartening for the wardens, who keep a close check on the numbers, to witness a phenomenon known as a ‘North Sea Surge’ that sweeps away many of the seals from their precarious rocky homes. The wardens then have to start counting them all over again to see how many have been swept away for good.

Although most boat trips operate in the summer, they also come out in the Autumn, weather permitting of course, to see the new arrivals.

Autumn may be a good time to come and see the new pups, but the seals are here all year round: Nevertheless, there are many people who come here for the birdlife, and the best time for that is the breeding season during the spring and early summer (April – Mid July), but that also means there’ll be a lot of other people doing the same thing.

There are two islands that can be visited to witness this incredible avian experience – Inner Farne and Staple Island. Staple Island is not so easy to land on, and our one attempt was thwarted by the conditions, but Inner Farne is much more accessible.

The Farne Islands are administered by the National Trust (which is why there’s also a landing fee), and to ensure that both birds and visitors are kept happy, access to the islands are staggered, with one island being open in the morning and the other one in the afternoon.

In the carousel below the first two pictures show guillemots and kittiwakes on Staple Island and the third picture was taken along the cliffs of Inner Farne. 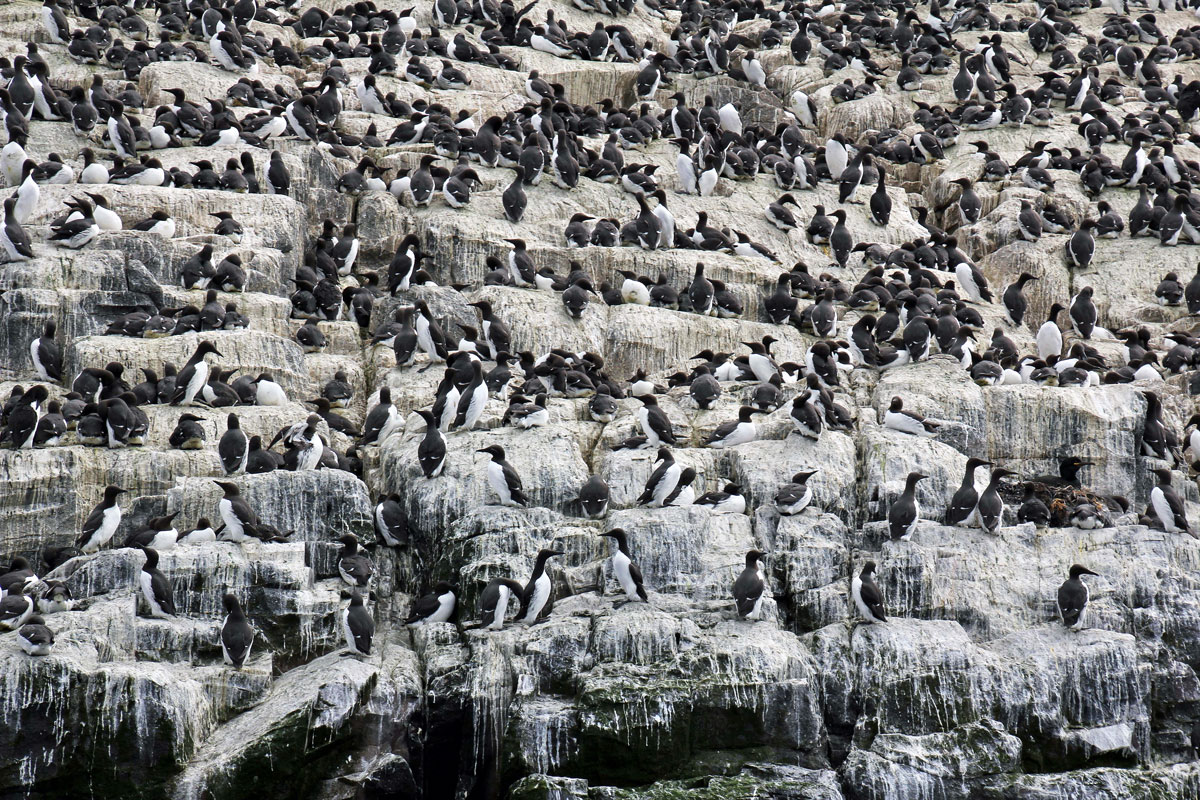 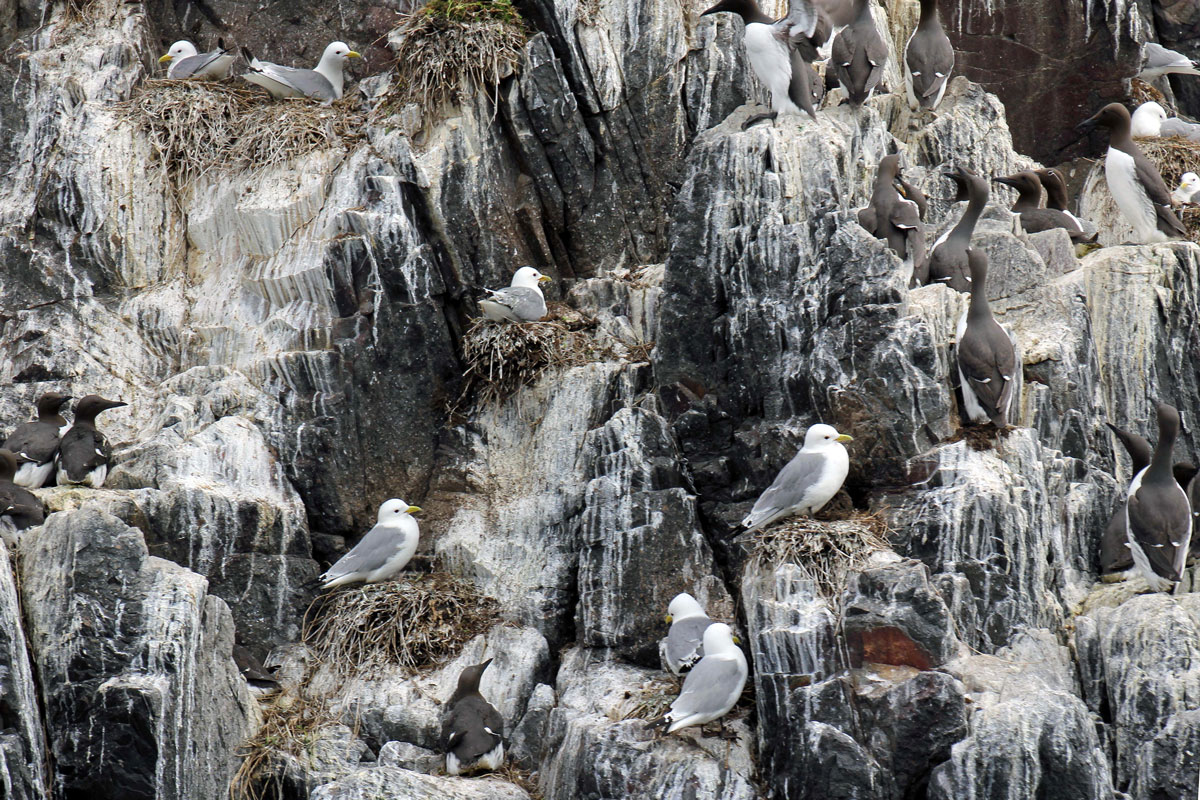 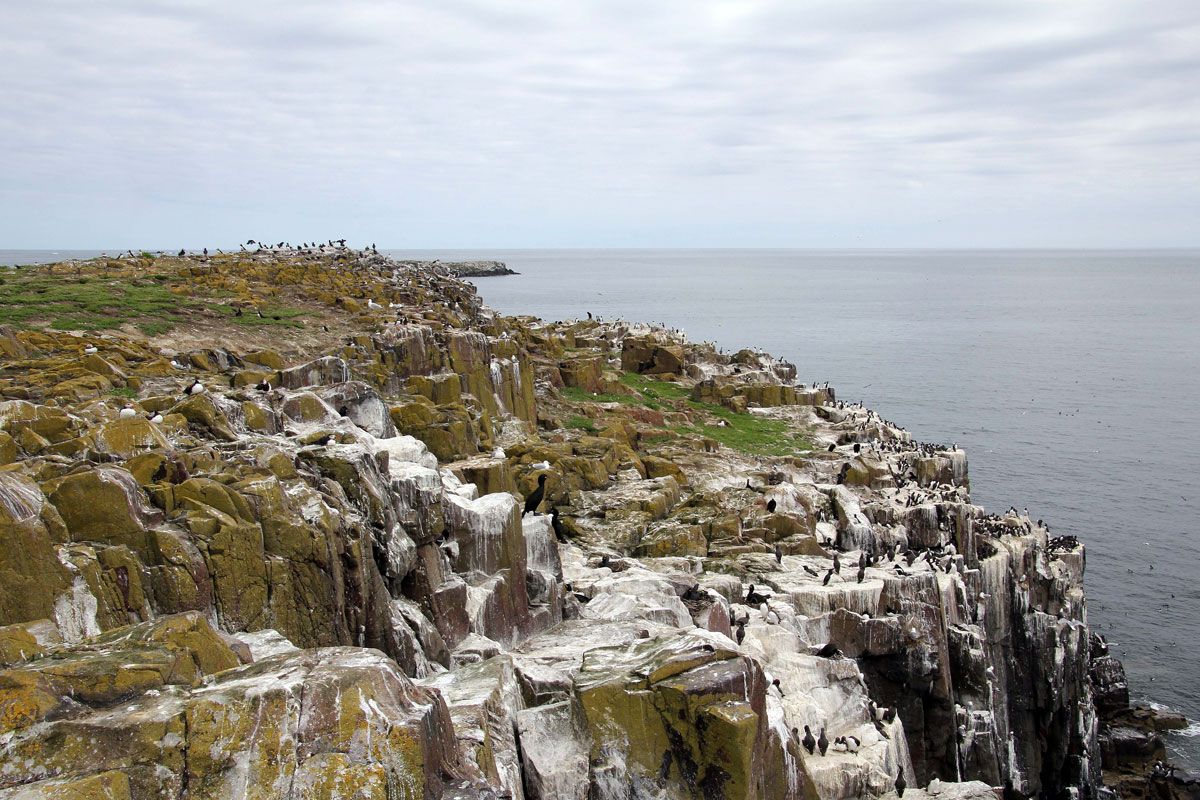 There are Eider Ducks, four different types of Tern, Guillemots, Shags, Black-Headed Gulls, and more – including over 50,000 Puffins, although they won’t all be here on Inner Farne at the same time, of course.

The carousel below shows 1) a Guillemot, 2) Puffin, 3) Arctic Terns doing what birds do during the mating season, 4) a Black-Headed Gull on her nest on top of a wall, 5) a Shag on her cliff-edge nest. 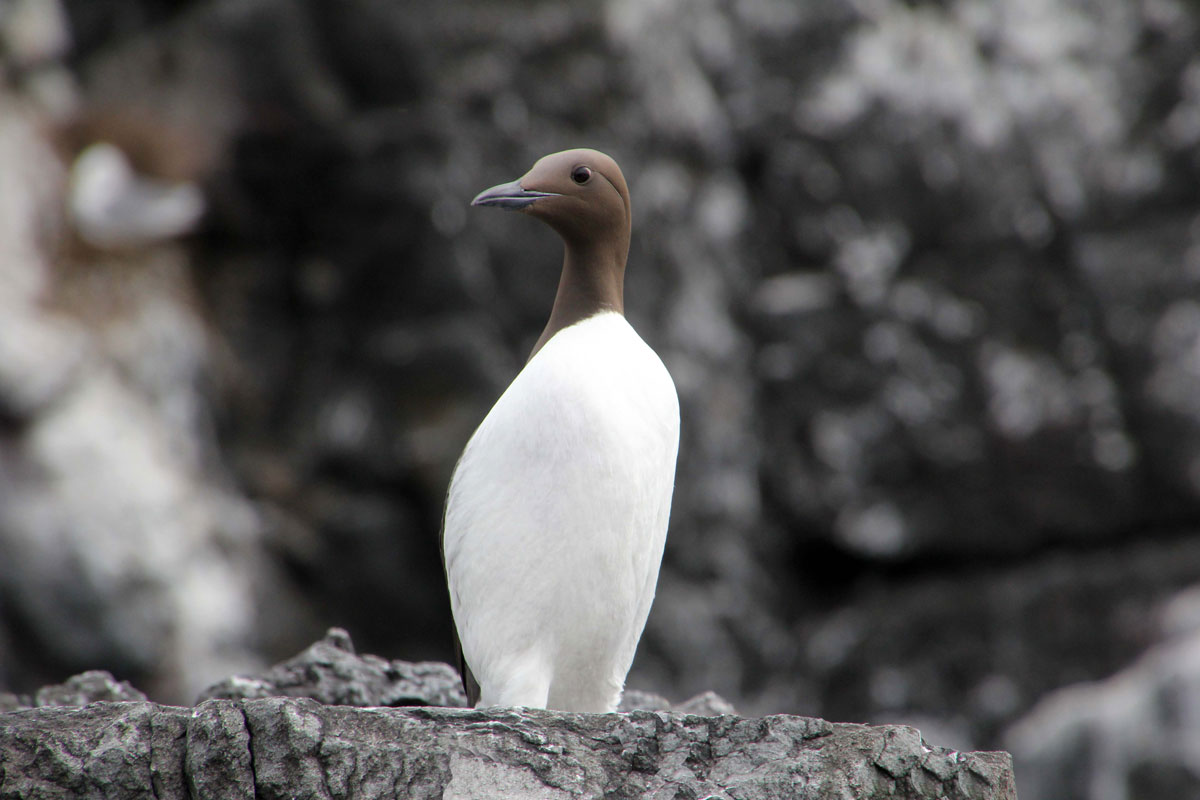 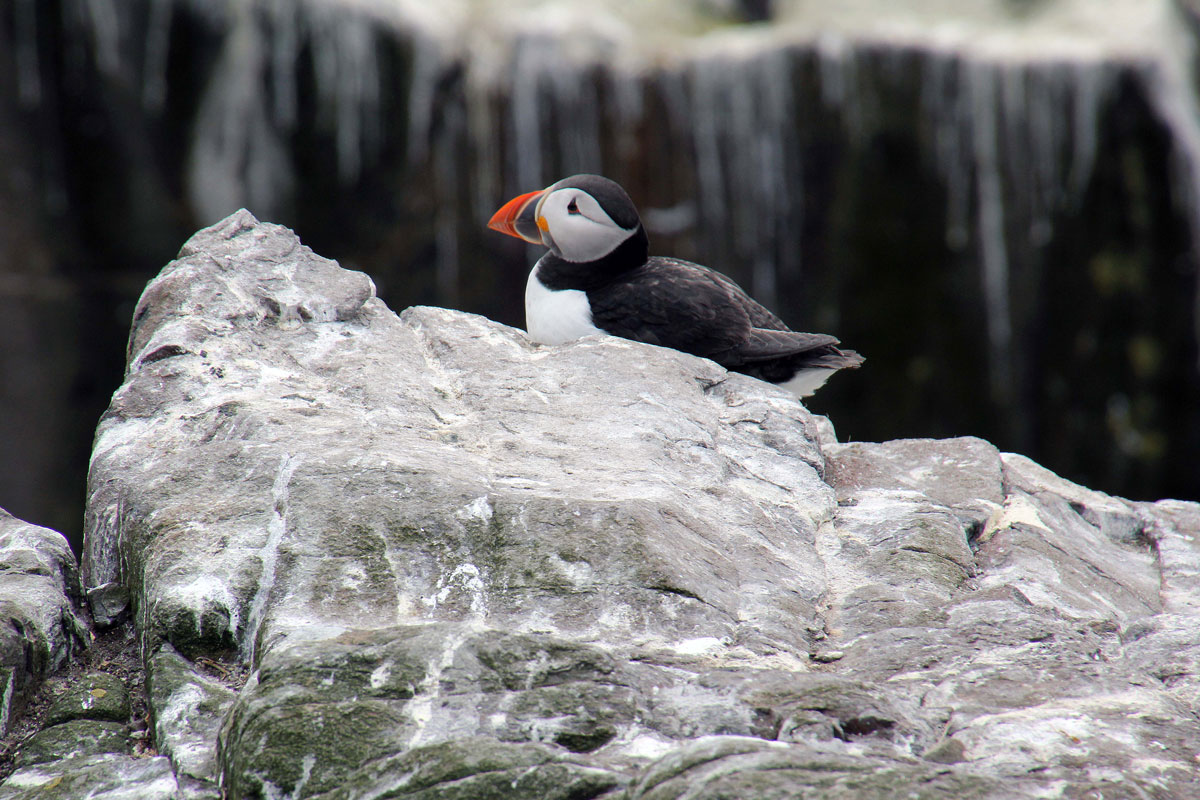 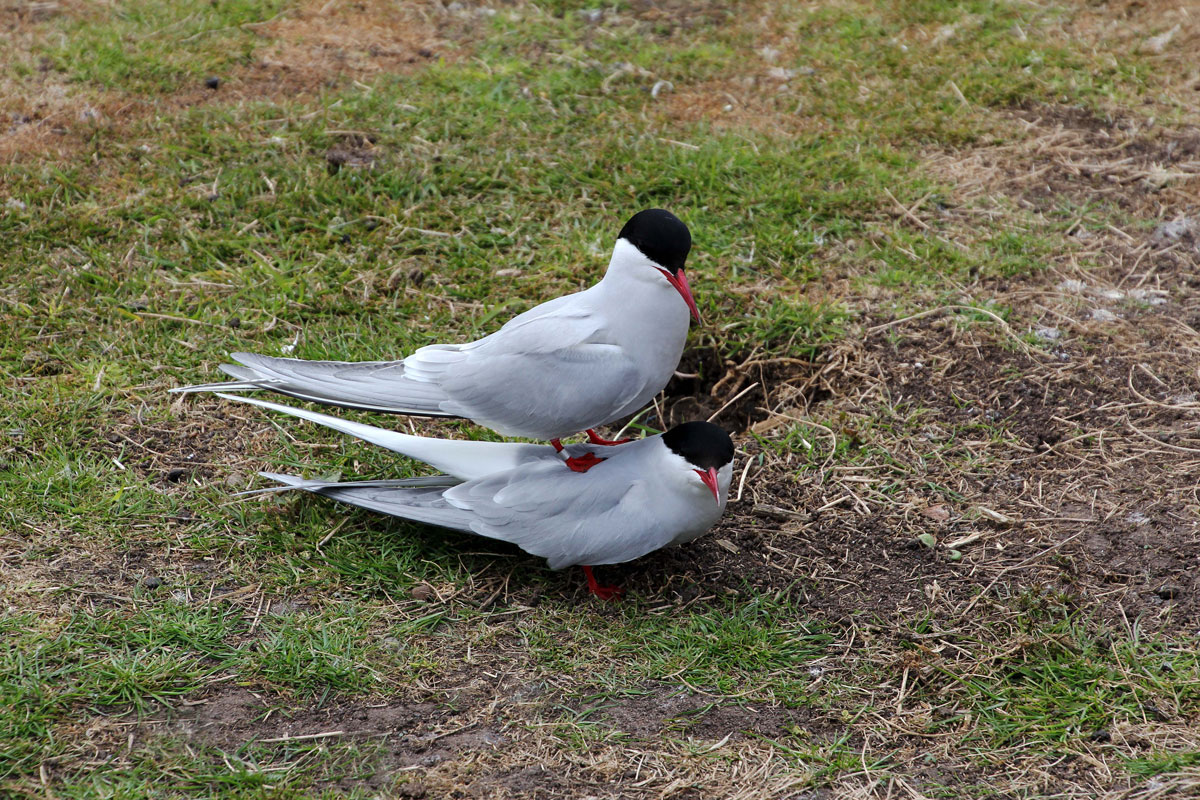 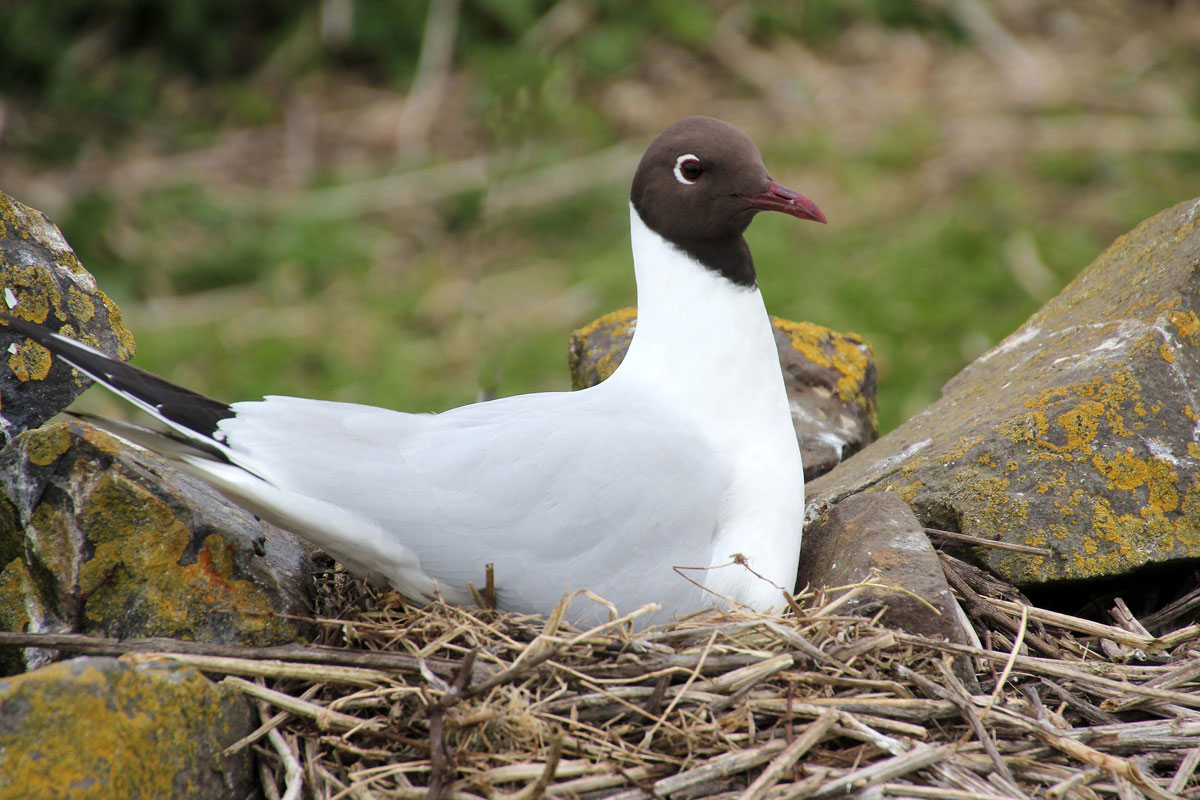 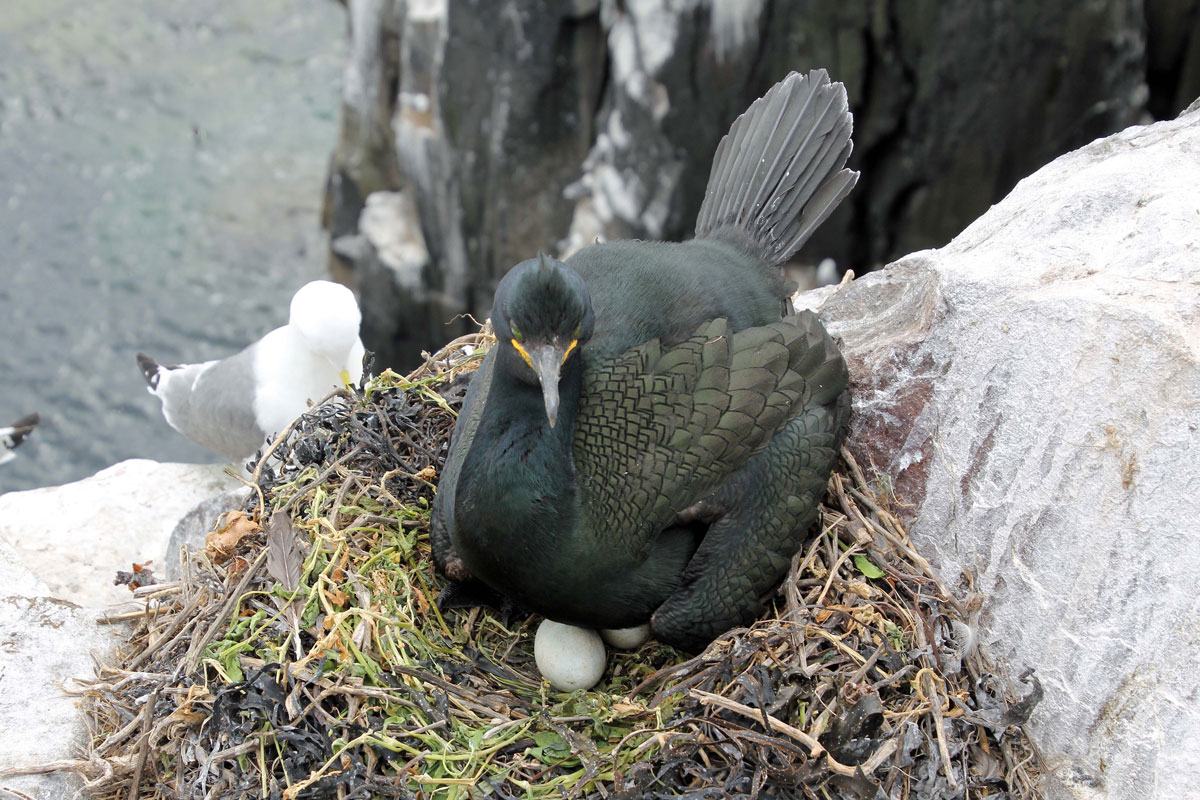 Most people who take the trip out here come to see the seals and birds, but there are also a couple of other points of interest that are worth knowing about.

The first one is connected to the ‘Holy Island’ of Lindisfarne which is located a short distance up the coast. I’ll be writing about Lindisfarne in a separate article, but one of its most influential figures was St. Cuthbert, who was the monastery’s Prior there during the 7th century.

St. Cuthbert was a man who preferred the simple life, choosing to live as a hermit, firstly on a small isle off of Lindisfarne, and then on the more remote island of Inner Farne.

It was with a certain amount of reluctance that he eventually accepted an offer of becoming Bishop of Lindisfarne, which meant that he was compelled to live a more orthodox lifestyle in order to honour his obligations as Bishop.

When his health began to deteriorate, he seized the opportunity to return to Inner Farne, and it was here that he died in 687 AD.

The site of the cell where St. Cuthbert lived is now occupied by the Pele Tower, a defensive fortification built between 1494 and 1519, and next to it is a chapel dedicated to him which has been here since 1370, although it needed some serious 19th century restoration after many years of neglect.

The other point of interest is The Longstone, the island you can see with the unmistakable red and white lighthouse. This lighthouse was the home of Grace Darling whose heroics have gone down in Northumberland folklore.

The story of how she and her father rescued survivors of the Forfarshire in rough seas in September 1838 also demands a separate article, but if you want to take a closer look then the MV Golden Gate trip includes a tour of the lighthouse. Unfortunately, I haven’t made it on to The Longstone yet, but hopefully I will at some point.

I never tire of the Northumberland coast and the Farne Islands are one of the main reasons why, so if you’re anywhere near Seahouses I urge you to take one of the boat trips on offer. I’d be surprised if you didn’t vow to come back again another day and do it all over again.

14 thoughts on “The Fabulous Farnes”