Fawlty Towers and the Gleneagles Hotel

When people talk about the Gleneagles Hotel it’s only natural to think they’re talking about the 5* hotel in Scotland which is set in 850 acres and offers distinguished guests everything from luxury accommodation and fine dining to three championship golf courses and country pursuits; but I’m not talking about that Gleneagles, I’m talking about the one in Torquay – you know the one – the one where you expect to see “the Hanging Gardens of Babylon and herds of Wildebeest” from the bedroom window.

There is a connection with the Scottish hotel however, because the first owner of the hotel in Asheldon Road named it after her favourite part of Scotland. Beatrice Sinclair bought it in 1964 when it was a private house and converted it into holiday apartments, and then, along with her husband Donald, gradually converted it into a 41-bedroom hotel.

From what I’ve read, Beatrice was a natural at running a hotel, but her husband wasn’t; in fact, he was quite the opposite and the guests were a complete inconvenience to him. According to former employee Rosemary Harrison she thought he was “bonkers” and he was quoted as saying “I could run this hotel just fine if it weren’t for the guests”.

In 1970, the Monty Python’s Flying Circus cast were filming clips for the show in Paignton and booked some rooms at the Gleneagles. Donald didn’t want them there as he was trying to run an upmarket hotel, but his wife had other ideas and the crew arrived for a planned two (some sources say three) week stay.

It was obvious right from the start that the manager/receptionist/porter wasn’t too keen on his new guests and it didn’t take them long to take the hint and leave for the more luxurious Imperial Hotel; all of them that is, apart from John Cleese who was later joined by his then wife Connie Booth.

There are several stories in Graham McCann’s book ‘Fawlty Towers’ about how the proprietor treated his illustrious guests, including one about disposing of Eric Idle’s bag because he thought it contained a bomb. He explained it away by saying that “We’ve had a lot of staff problems lately”. It wasn’t just the Monty Python crew that got on the wrong side of him, it sounded like most of the other guests did too. He recounts one story of how a newly arrived academic found no more than a couple of sheets of lavatory paper and had the audacity to ask for more; “What on earth are you doing with it?” was the reply.

John Cleese described him as “the rudest man I’ve ever met”, but he couldn’t resist following his every move so that he could use the material for his idea that was to come. It has to be said that Beatrice always defended her husband and was never happy about how Donald was portrayed, but there seemed to be plenty of guests and employees who saw it differently.

The Sinclairs sold the hotel in 1973 and Donald was still falling out with people after he retired: According to Graham McCann, after berating a couple of workmen the day before, “he woke up the following morning, peered out through his bedroom window and was horrified to find that his car, swimming pool, garden furniture, doors, walls, lawn, trees and bushes had all been painted the same shade of battleship grey during a long night of stealthy retaliation”.

After the filming of Monty Python and the Holy Grail in 1974, John Cleese was free to turn his attention to creating the Fawlty Tower sketches with Connie Booth. The first series started being broadcast on 19th Sept 1975 with A touch of class being the first episode. Although John Cleese as Basil Fawlty is the undoubted star of the show, it should be remembered that his wife had a tremendous input into the script and characters, even though she played a much lesser part as the waitress and chambermaid, Polly Sherman.

The socially superior Basil Fawlty (in his eyes) was often put in his place by his ‘golfing puff adder’ wife, Sybil, played by the perfectly cast Prunella Scales: His Spanish waiter, Manuel (Andrew Sachs), on the other hand took the brunt of Fawlty’s frustration with both verbal and physical abuse, partly because his ability in communicating in the English language often left his boss totally exasperated.

The programme only ran for two series with six episodes in each, which left fans wanting more. It didn’t set out to be like that, but the decision to cut it off after twelve episodes probably helped in making it such a success.

If you’re a fan of the manic hotelier, you’ll be well aware of his inclination to suck up to people like Lord Melbury or the hotel inspectors, and if his lack of patience with the “riff-raff” that occupied his hotel wasn’t bad enough, then, as the clip below shows, he also had the car to contend with.

None of the scenes were filmed in Torquay and the building that was shown as the hotel was actually Wooburn Grange Country Club in Bourne End, Buckinghamshire. It’s not there anymore because it was gutted by fire in 1991 and subsequently demolished. Below is a scene there with Basil, Manuel and Sybil in a farce with wedding guests.

Another regular throughout both series was the rather dotty Major Gowen played by Ballard Berkeley. He was probably the least politically correct character of all, but really more interested in his newspapers and the cricket scores than what was going on around him, and quite oblivious most of the time. The clip below shows what happened when Manuel and the Major got together.

It was inevitable I suppose that the success of Fawlty Towers and the connection with Donald Sinclair would bring a notoriety to the Gleneagles Hotel that it otherwise wouldn’t have had. Under the management of the independently owned Best Western hotel chain, it started to offer special Fawlty Towers Weekends about four times a year.

Included in the reasonably priced package was an interactive dining experience with Laughlines, a British Fawlty Towers Touring Company. A couple of friends of mine from Belgium, Kirsty and Adam Sheridan, thought it would make a good weekend away, and so on an autumnal night in late November 2014 I joined them for an evening of mayhem and laughter with ‘Basil, Sybil and Manuel’.

As you can imagine, it was a cracking evening. Extremely well organised, where good food and entertainment happily mixed together. The professional actors reproduced some of the classic moments from the shows and made up some of their own as well. Can you imagine, for example, diners being offered a tin of biscuits to accompany their cheese only to find Basil the Rat making an appearance. Manuel was constantly getting a slap across the head from Basil (and so he should have done because he kept taking my soup away), but Sybil was always around to make sure things didn’t get completely out of control.

In the carousel below the pictures show Basil, Manuel, Manuel getting a slap around the head from Basil, and Adam & Sybil. 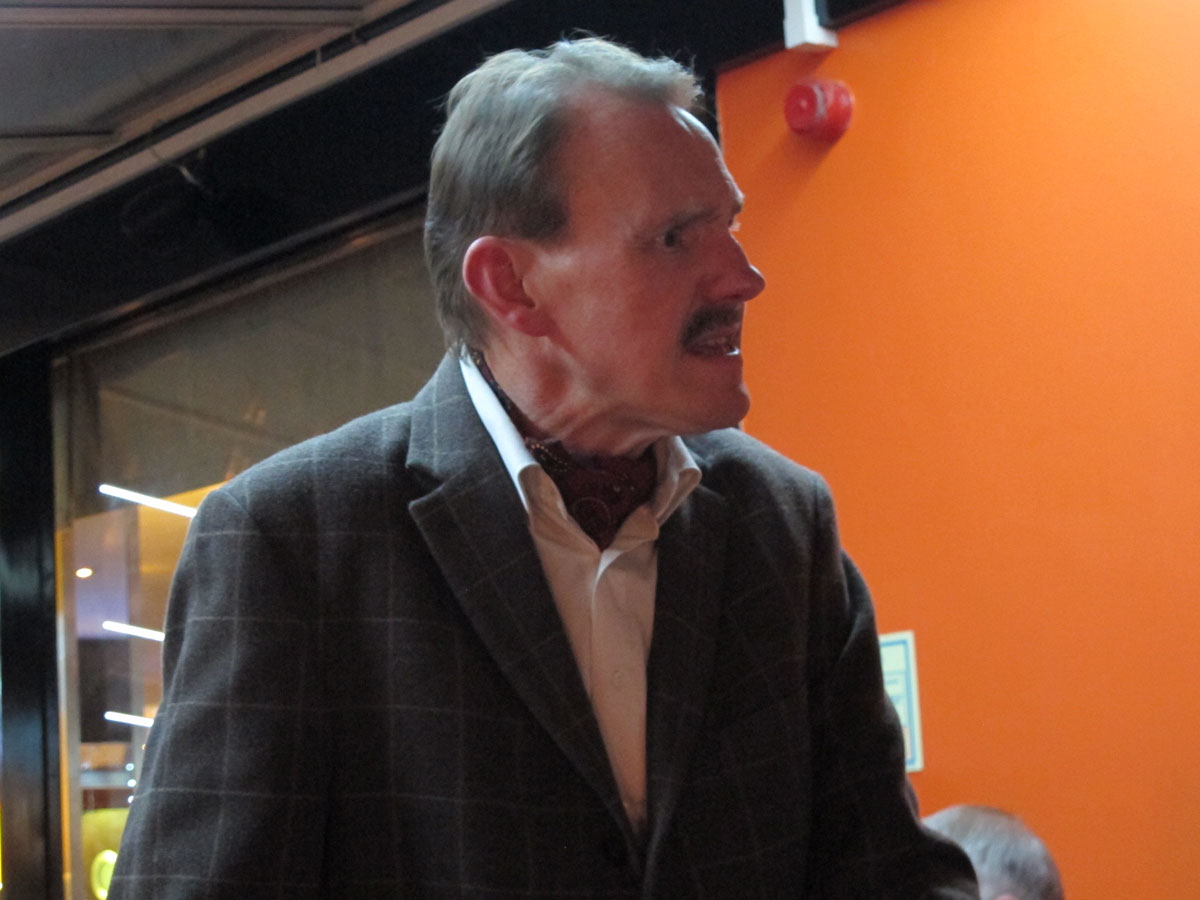 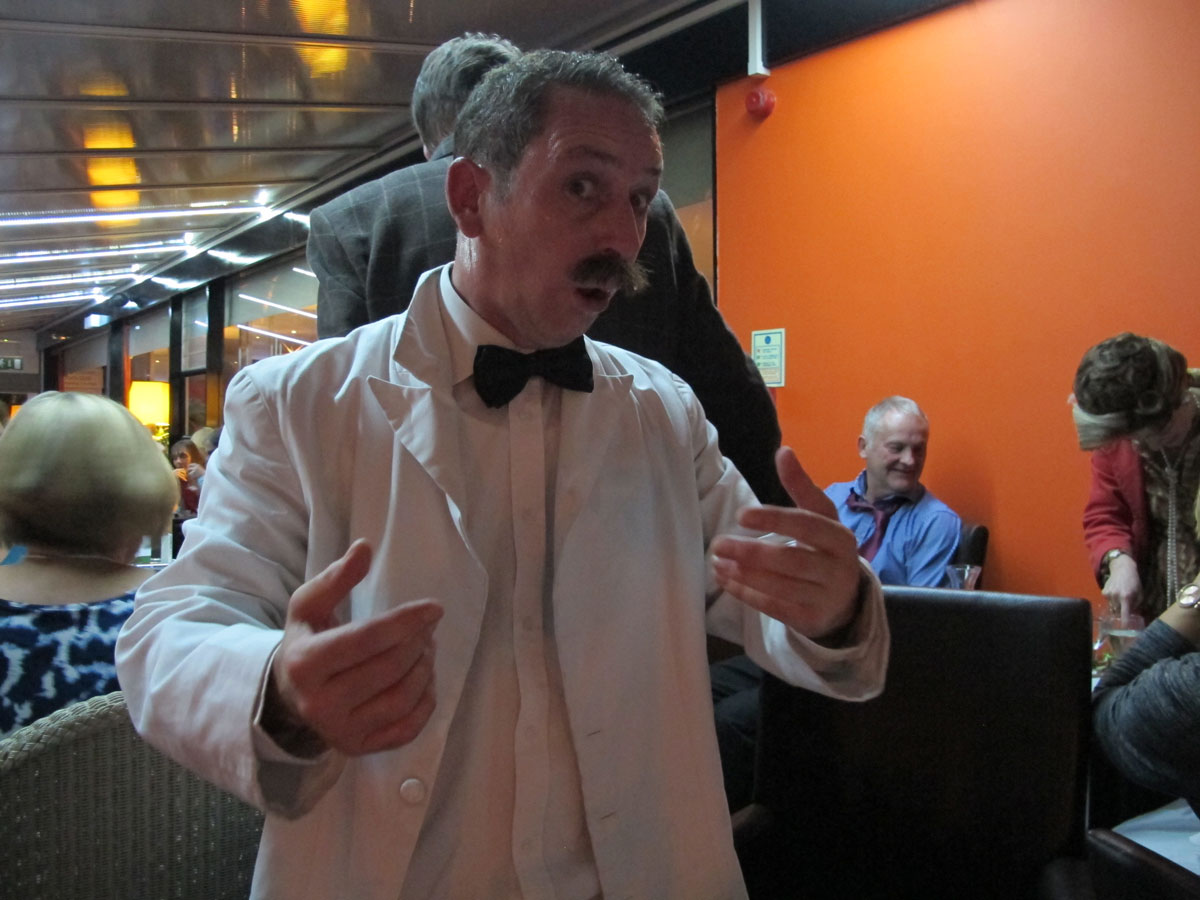 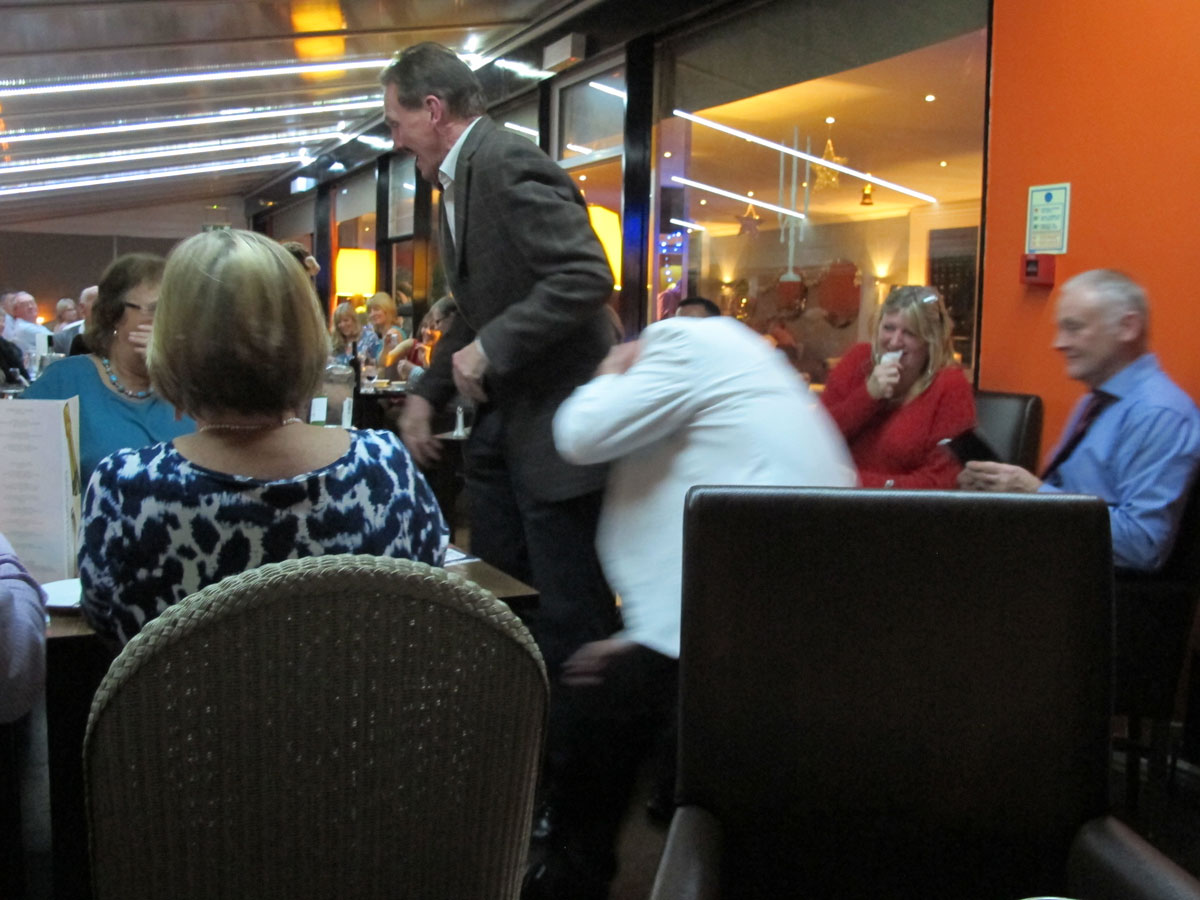 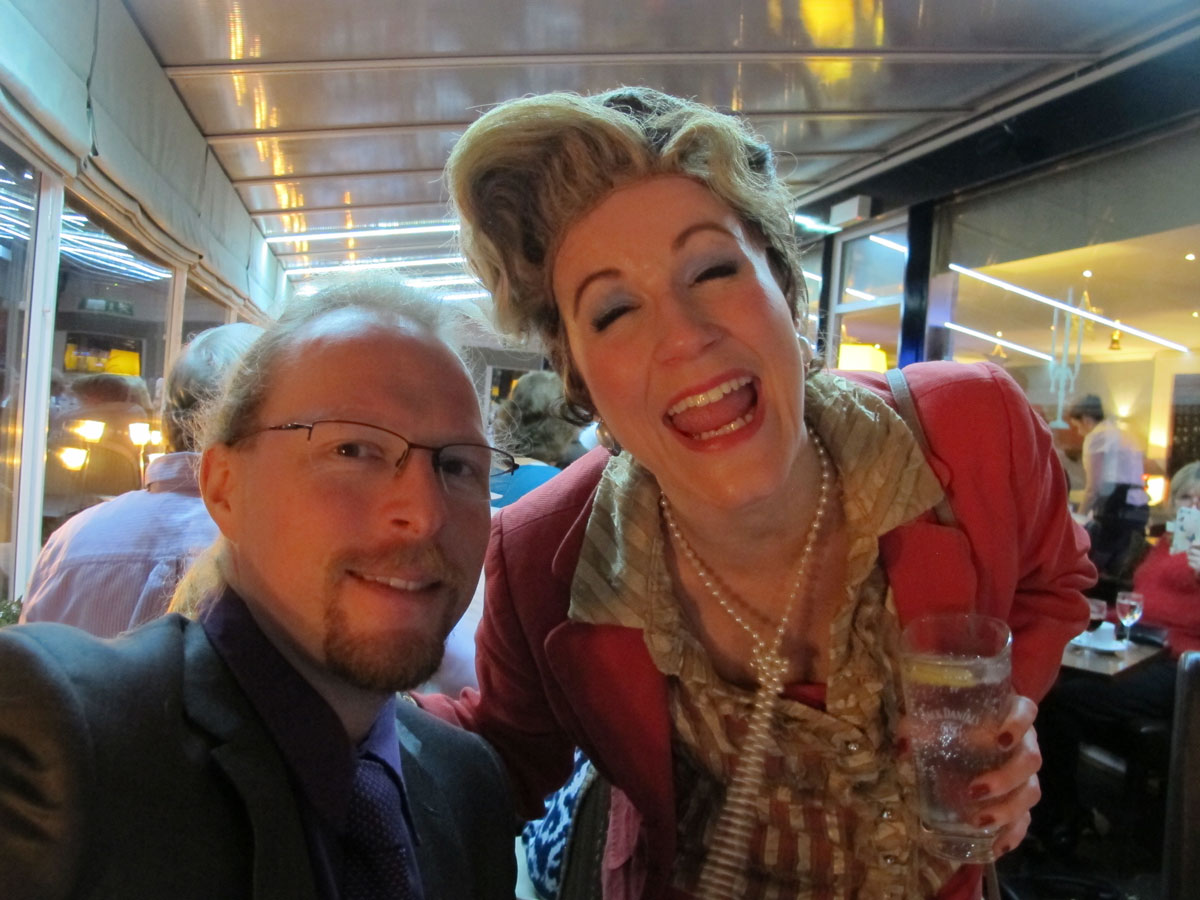 All good things come to an end as they say, and it wasn’t just the fabulous evening that we had I’m talking about now, because although we didn’t know it at the time, it was to be the end of an era for the Gleneagles Hotel. Within three months the hotel was closed up for good. Plans were submitted – and passed – for the hotel to be demolished and replaced by a block of 33 retirement apartments. These apartments have been named Sachs Lodge after Andrew Sachs who played Manuel. He died in November 2016.

Time never stands still, and looking back to when the series was made, it does seem a different era in many ways, but I’ll leave you with a clip that shows why Fawlty Towers was one of the funniest and most successful British sitcoms of all time.

31 thoughts on “Fawlty Towers and the Gleneagles Hotel”