The Isle of May

Located in the mouth of the Firth of Forth, about 5 miles and a 45-minute boat ride from Anstruther, is the uninhabited Isle of May. I say uninhabited, but that’s not strictly true because it’s home to a fantastic collection of seabirds.

If you think that this is yet another lovely peaceful Scottish island, you’d be wrong because the first thing that will hit you when you arrive on this 1½ mile long island is the deafening noise made by around 200,000 birds.

Admittedly, it was breeding season when we came, and apart from bringing some ear plugs, I would also recommend wearing a hat, preferably a white one.

Most of the cacophony of noise seemed to be coming out of the beaks of the 4 different species of tern that breed here, who also had a nasty habit of dive bombing anybody who strayed a bit too close to their nest – and even those that didn’t.

I’m not sure why they felt threatened really, because the island is a National Nature Reserve, owned and managed by Scottish Natural Heritage who obviously make sure that the well being of the birds come first. When you arrive on the island a warden greets passengers off of the May Princess, and then gives a short talk about the island and guidelines on where you can, and can’t go. It’s mostly just common sense to be honest.

Before I go any further, I have to admit that although I love watching birds I’m no expert: Even so, it was easy enough to spot some of my favourites; there were plenty of Guillemots, Razorbills, Puffins, Kittiwakes and Gannets (but not as many as there are on Bass Rock): There’s also a new addition to my list of favourites – the Eider Duck. I couldn’t help but fall for a female who was sat on her nest and not in the least bit bothered my presence.

The carousel shows some Guillemots, a Puffin and the female Eider Duck. 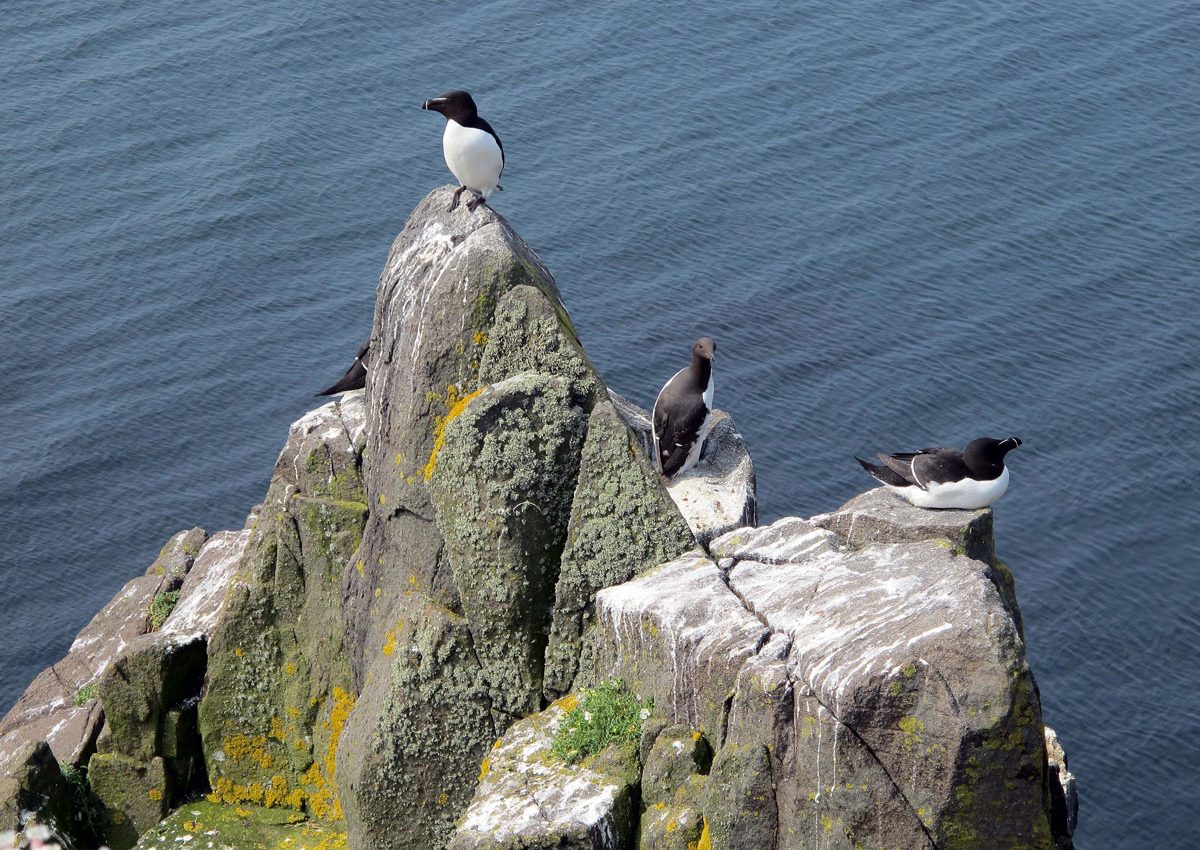 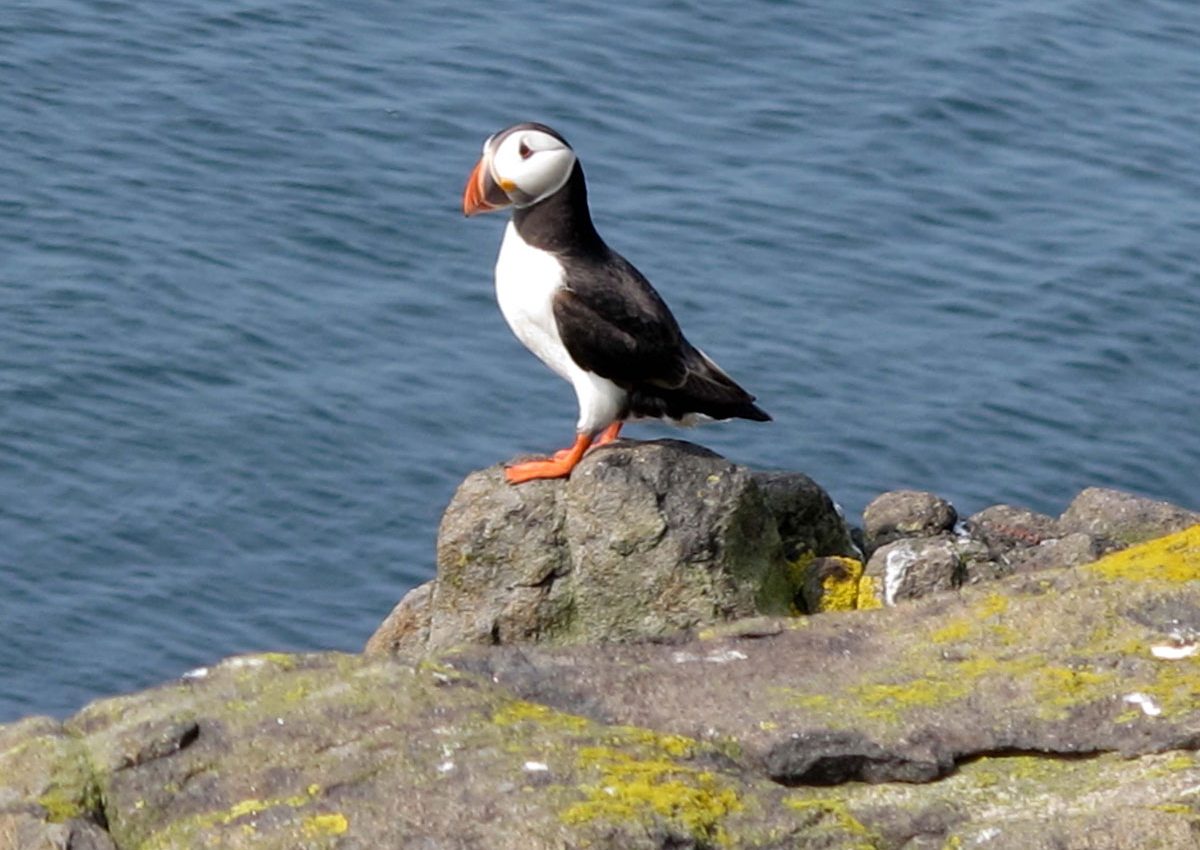 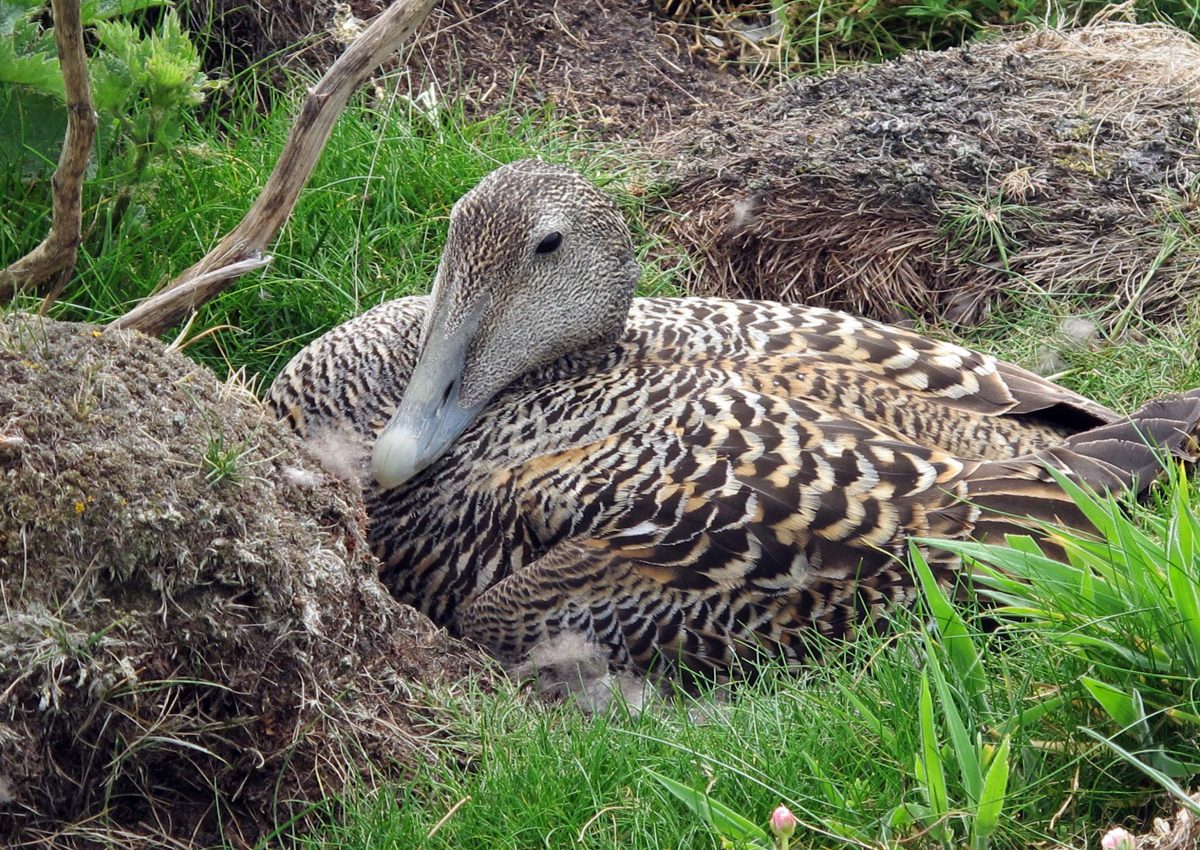 The birds are the undisputed stars of the show, but there are other things to see and do in the 3 hours or so that you’re given to explore the island.

A short distance from the arrival and departure point at Kirkhaven are the ruins of a priory built by Henry I in 1125 in memory of St. Adrian, an Irish missionary who was murdered here by Vikings in 875, but a more substantial relic from the past is The Beacon, Scotland’s first ever lighthouse.

It’s not difficult to see why The Beacon was built: After many shipwrecks and loss of life, Alexander Cunningham constructed the square tower near the centre of the island in 1636 with a coal-burning beacon on top.

You would think, wouldn’t you? that everybody would be grateful for this aid to saving lives, but not so. The problem was of course, that the cargo from shipwrecks found its way into the hands of locals who could put it all to a much better use, or at least that’s how they saw it.

No doubt The Beacon did help to save many lives, but perversely, there were some that it also took.

In 1791 a storm blew out the Beacon for two days, and a short time afterwards, the keeper, his wife and five of his six children were found dead: It seems that the embers from the Beacon caused poisonous Sulphur dioxide fumes to seep into their bedroom while they were asleep.

This Beacon was superseded in 1816 by the nearby unmistakable Main Light designed by Robert Stevenson (uncle of the author Robert Louis Stevenson). It’s still in use today but operated remotely. It’s not the only lighthouse on the island either, but the Low Light (built in 1844) is now used as a bird observatory.

Lighthouses are meant to be seen, and foghorns are meant to be heard, and there are two monsters on the island which thankfully didn’t need to be used during our visit, but I think we would have needed those earplugs if they had.

By the time you’ve walked around the island, observed the birdlife, and taken in some of the island’s features, it’ll be time to leave Kirkhaven.

Our journey from Anstruther to May had brought us along the eastern side of the island, but the return sailing was to take us around the other side, where not only could we see the cliffs and birdlife up close, but also some of the resident grey seals. Outside of the breeding season the numbers of seals that can be seen are around the hundred mark, but come the Autumn the population increases into the thousands when around 4,000 seals haul themselves ashore, mate, and give birth to around 2,000 pups.

The May Princess runs from the beginning of April to the end of September and so it’s possible to see some of the first pups at the end of the season. The breeding season for the seabirds is between April and July.

The trip lasts between 4½ and 5 hours and currently costs £28 for a full fare-paying adult and concessions apply (June 2019).

If you’re ever lucky enough to find yourself in the East Neuk of Fife and the weather’s looking good, take my advice and jump on board the May Princess and head out to the fantastic Isle of May. Even if you forget your earplugs and hat, you won’t forget the Isle of May.