Being South-West England’s largest city, nobody would argue that Bristol is the region’s de facto capital, but its geographical position in the north of the region is often blamed for a lack of resources spreading out into the rest of the south-west. “Nothing gets past Bristol” is a phrase I’ve often heard, and one that I’ve used myself, but in my view there’s no other town or city with better credentials.

Until the Industrial Revolution, Bristol had always been one of the country’s foremost cities mainly thanks to its rich, but checkered, maritime history.

The city grew up in a sheltered position on the banks of the River Avon approximately 6 miles from the mouth of the river where it joins the River Severn. The location gave it both protection and access to the Bristol Channel and beyond.

The Avon also split the city into two. On the north side of the river was Gloucestershire, and on the south side was Somerset – that was until 1373 when it became a county in its own right – and it is still officially called the City and County of Bristol.

As the river became silted up and more difficult for larger ships to navigate, new facilities were built at Avonmouth, Portishead and Portbury. In the 1970s the City Docks were closed down with some of the old warehouses being turned into cultural attractions, bars and restaurants.

Being a port and an aircraft manufacturing city, Bristol was a prime target for the Luftwaffe, who literally ripped the heart out of it. The historic city centre lost many important buildings, but like countless towns and cities elsewhere, regeneration after the war came in the form of new architectural ideas, some of which worked, and some of which didn’t.

One thing that Bristol didn’t suffer from as much as other parts of the country, was the decline in industry and manufacturing. During the 1970s and 80s the industrial heartlands of Britain suffered from foreign competition and a swing towards the service industries for economic wealth. Not being a major industrial area, the city was well placed to take advantage of the change in circumstances and many regional offices sprang up almost overnight.

The perception that Bristol was a thriving city in the South of England without the problems of the cities of the Midlands and North meant that there was a wake-up call for the rest of the country when racial tension flared up in 1980 as serious rioting erupted in St. Paul’s. Everyone else might have been surprised, but Bristolians weren’t, and it was a warning of what was to come the following year when similar riots broke out up and down the country.

The decades leading up to the end of the millennium were a time of change everywhere. Post-industrial Britain was creating a climate of uncertainty for people from all backgrounds and it was around this time that Bristol spawned a new type of culture, which although not unique, was different from what had gone before. Bands such as Massive Attack and Portishead led the way in a new genre of music known as ‘Trip Hop’ and Banksy became universally known for his Wall Art (or graffiti if you prefer).

Whether you appreciate this type of thing or not, at least it all adds to the mix of what Bristol has to offer the visitor. Being a native Bristolian, it’s my intention to write posts covering many aspects of city life covering its past history to the present day. I hope you enjoy them. Please let me know if you do – or even if you don’t. The Gentrification of Stokes Croft

Mention the name Stokes Croft to anybody in Bristol, and you’ll get an immediate reaction. Some see it as a cultural hub, but others are less enthusiastic, seeing it as a graffiti-ridden area full of drugs, crime and homelessness. The Stokes Croft world is a very different one to mine – but it’s changing, and […] I’d like to think that my wanderings sometimes inspire people on places to go, but at the same time I also think it’s worthwhile pointing out places where they shouldn’t, and The Bearpit is one of them. The reason I’m writing about The Bearpit is because it’s right in Bristol’s city centre and it would […] 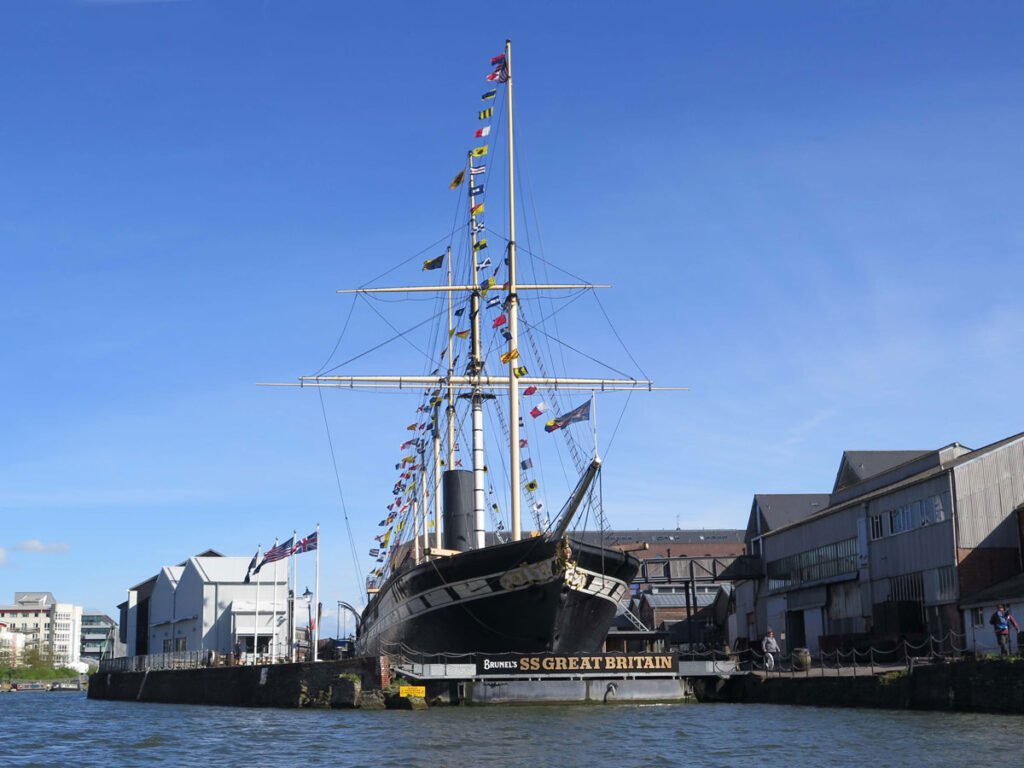 On the 19th July 1843 crowds thronged the slipway at Bristol’s Great Western Dock to watch Prince Albert launch the ‘world’s first great ocean liner’, and on the 19th July 1970, exactly 127 years later, crowds once again lined the banks of the Avon to see the grand old lady brought back home to her […] 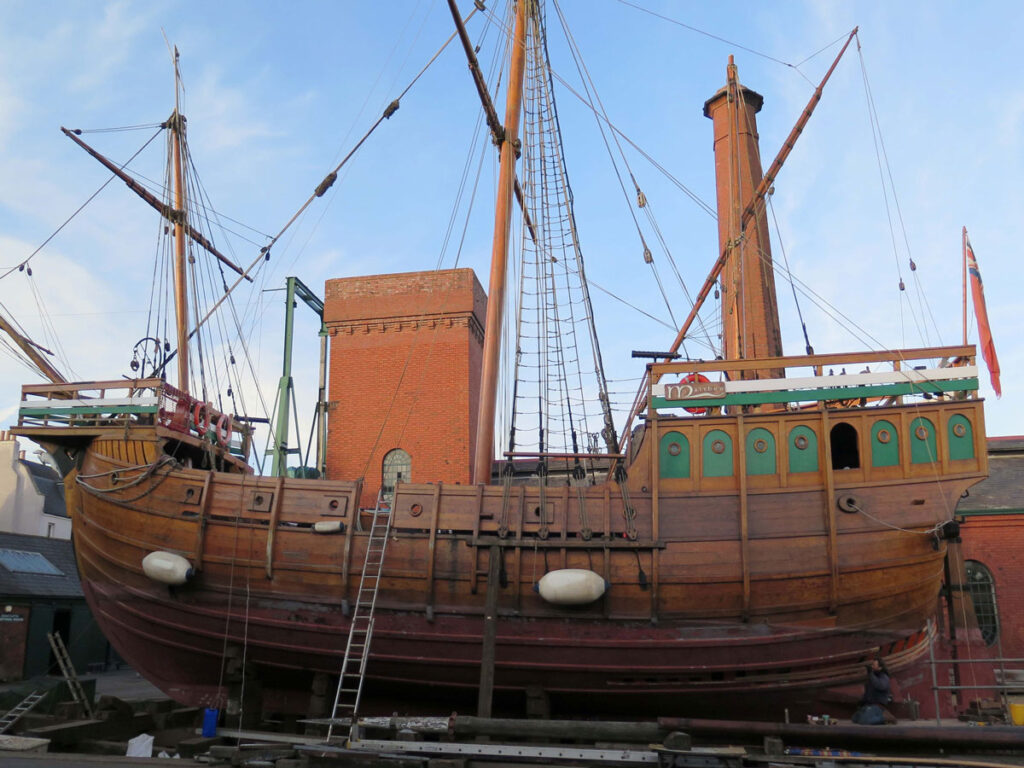 Prior to the creation of William Jessop’s Floating Harbour in 1809, the River Avon flowed through where Underfall Yard now stands. The construction of Cumberland Basin and the New Cut meant that an island was formed between where the river was diverted and Bathurst Basin at Redcliffe. This island became known as Spike Island. Jessop’s […] 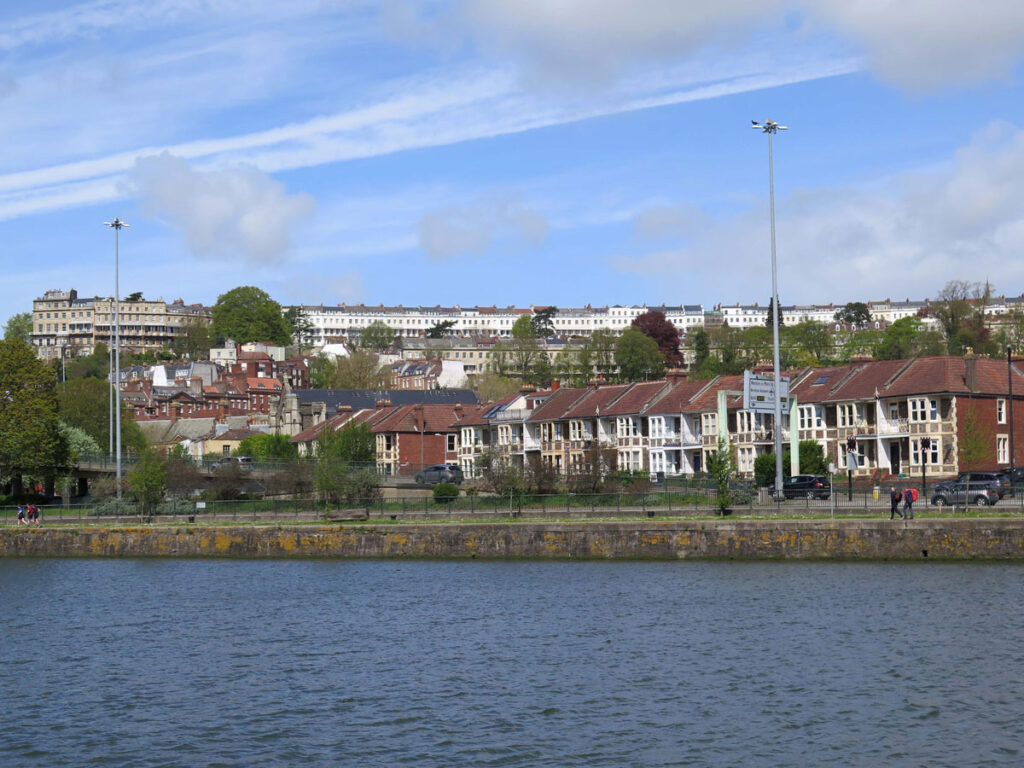 I deliberately kept my previous article about Bristol’s Floating Harbour short and sweet for two reasons: The first one being that I didn’t want people to immediately lose interest in a topic that is important to the city’s heritage, and the second one is because my name isn’t Isambard Kingdom Brunel. All the same, I’ve […]

Bristol’s Floating Harbour doesn’t float, so why is it called that? It takes a bit of explaining, but to understand what the Floating Harbour is will help to explain why Bristol’s maritime history was so important to the city for so long. The port developed approximately 8 miles from the mouth of the River Avon […] 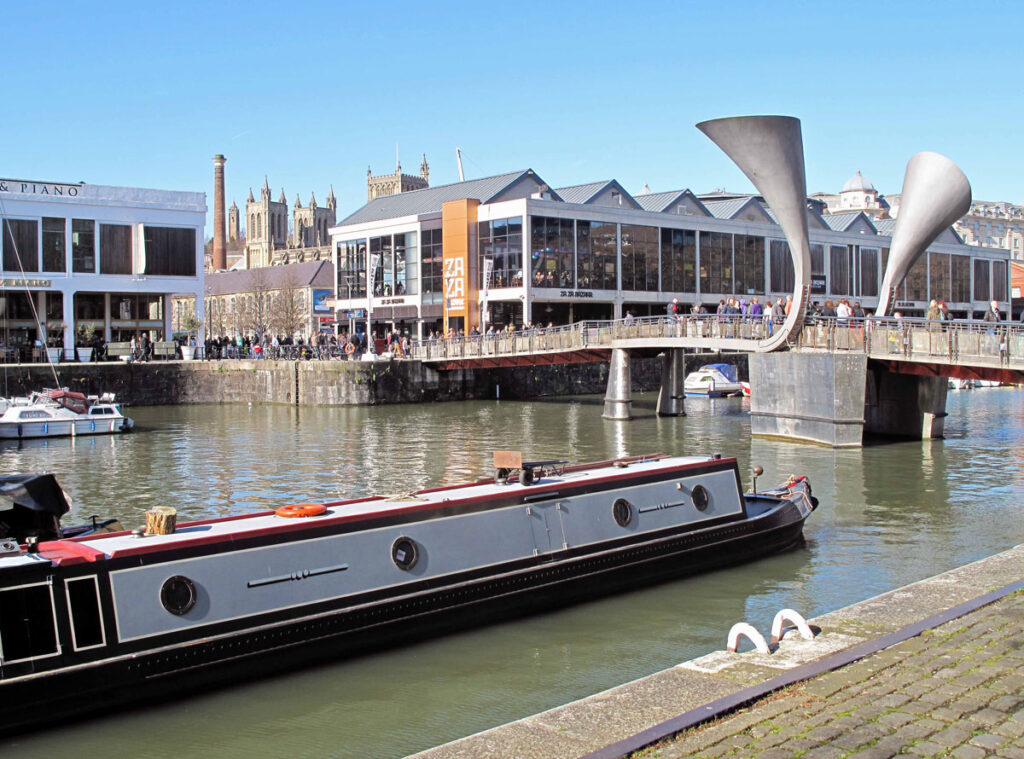 The Centre and St. Augustine’s Reach

I don’t think too many Bristolians would disagree that the city’s focal point is ‘The Centre’. It’s where people have traditionally met up, maybe for a ‘Blind Date’ outside the Hippodrome or somewhere. It’s a good location for that sort of thing because if your intended partner for the evening didn’t quite live up to […] No visit to Bristol would be complete without following in the footsteps of the merchants, explorers, and privateers who helped make the city one of England’s foremost ports. Times have changed of course, and these days you won’t need to worry about bumping into press-gangs, one-legged sailors, or having a Black Spot thrust into the […]

Bristol’s College Green – A Place for Picnics, Politicians and Protests

College Green is where traditional and modern Bristol often collide. It can be an oasis of calm one minute, and anything but the next, and the reason for this paradox is that although it belongs to Bristol Cathedral, it is managed by Bristol City Council whose offices overlook the Green. Originally, the area was the […]

Those of you who follow my blogs are probably thinking “Oh no, not another cathedral”, and even though it doesn’t quite match the grandeur of some of England’s other great religious houses, it’s the one that made my home town a city, and there’s no way I’m not including it in my historical chronology of […] Where Bristol Castle Once Stood Pt 4 – Whatever happened to it?

This is the final instalment of my blogs on Bristol Castle and it describes events leading up to its demise. It makes sense therefore, if you haven’t already done so, to read the previous three blogs first, the links to which you can find at the end of this post. With the death of Edward […]

Where Bristol Castle Once Stood Pt 3 – The Three Edwards

In the previous article (which you can find here) I recounted how Prince Edward had found himself besieged in Bristol Castle by the local population. You would think therefore that when he became king after his father died in 1272, it would be pay-back time, but fortunately for the citizens of Bristol, Edward I had […] 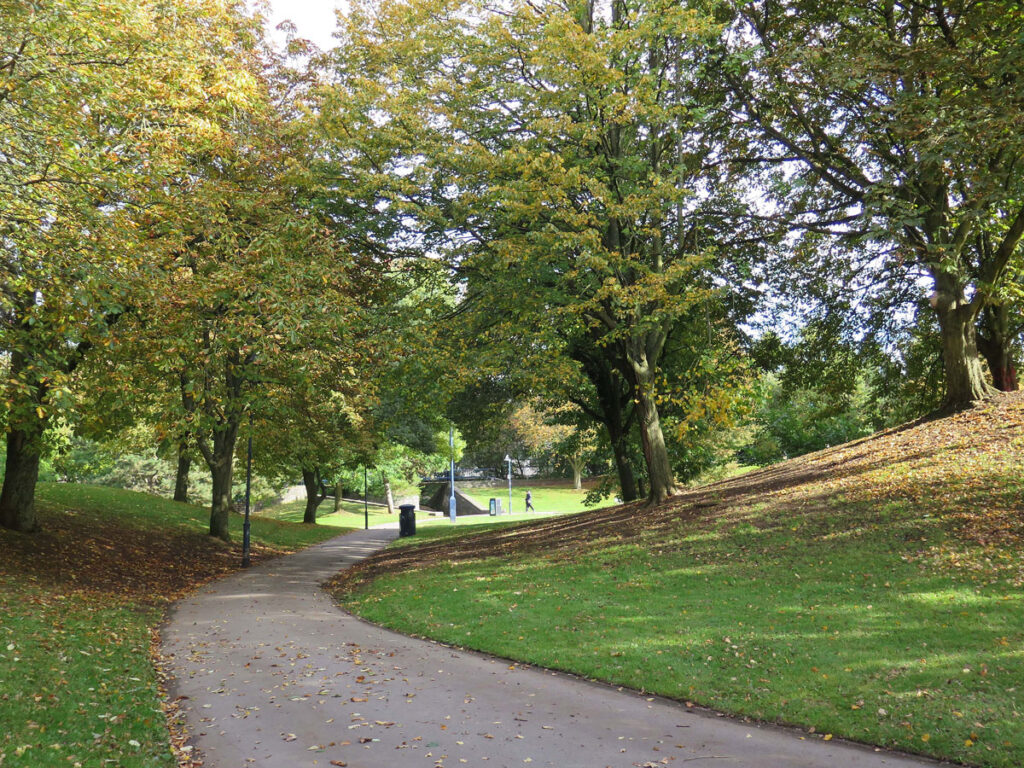 Where Bristol Castle Once Stood Pt 2 – The First Plantagenets

In this second part of a series of posts about Castle Park, I’m going to try and unravel what happened at Bristol Castle when the first Plantagenets took over from the Normans after the Anarchy. If you haven’t read the first part yet, or just want to refresh your memory you can read about it […] 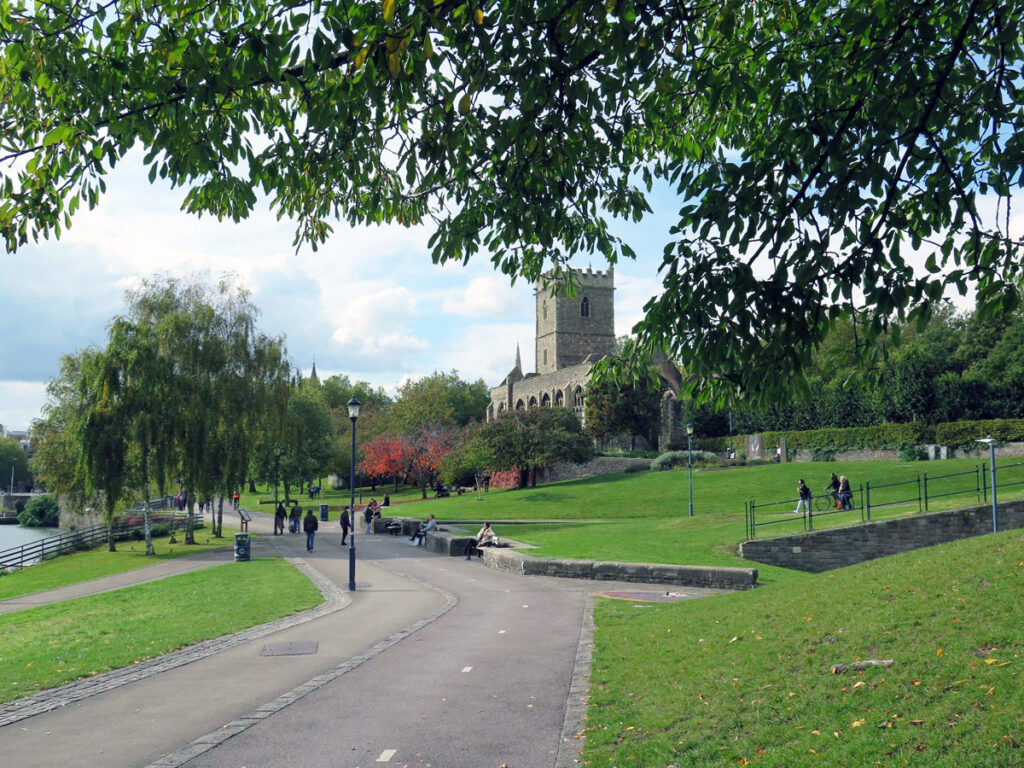 You wouldn’t know it, because there’s hardly anything left to see, but Bristol once had an impressive Norman castle. A lot of water has passed under the drawbridge since then, and where the castle once stood, there is now an open recreational green space occupying the land between the River Avon, the Old City and […]

Wandering Around Inside the Old City Walls

If the title of this post gives anyone the impression that wandering around Old Bristol is similar to wandering around York or Chester then I apologise straight away. For a start, apart from one notable exception, there are no parts of the old city wall left, and don’t expect to come here and tick off […]

Brycgstowe, Brigstow, Bricgstoc – It doesn’t matter how it was spelt, to the Saxons it meant the same thing – ‘Place by the bridge’. The tendency for Bristolians to add the letter ‘L’ onto the end of words is no doubt the reason for today’s spelling, but why did they build a bridge here? The […]