Babbacombe, although part of Torquay, has a totally independent feel to it. There are similarities such as a prom, harbour, beach and even a theatre, but generally speaking, it’s a much more reserved and low-key location than its larger neighbour.

The focal point is Babbacombe Downs, which at 300 ft. above the sea below, offers commanding views around Lyme Bay towards Dorset.

On a clear day it’s possible to see as far as Portland Bill, so where better to just lounge around and enjoy the view, perhaps with some fish and chips from Hanbury’s in nearby Princes Street. As tempting as that might be, it’s probably better to work up an appetite first, and a short walk around Babbacombe will not only do just that, but will also provide you with quite a few things to see and do along the way.

If you’ve got kids in tow, a good starting point is the Model Village which has been giving pleasure to holidaymakers since 1963.

As someone who’s not normally into attractions like this, I decided to pay it a visit because it’s been one of Torquay’s most visited tourist destinations for years, and to write about Babbacombe without talking about the model village would be like going to Cairo and not mentioning the pyramids. Ok, that might be stretching it a bit far but you get the gist.

It was obvious from the time I walked in that this place was full of people of all ages, with and without kids, and whether you’re into model villages or not, you would have to be having a bad day if you weren’t impressed with the setting, the attention to detail and the amount of work that has gone into this labour of love over the years. Not only that, it’s constantly changing to keep up with the latest trends and events and on Summer evenings the whole place is lit up. To quote one visitor “Three seniors walked in and three kids walked round”. It does seem to have that affect somehow. 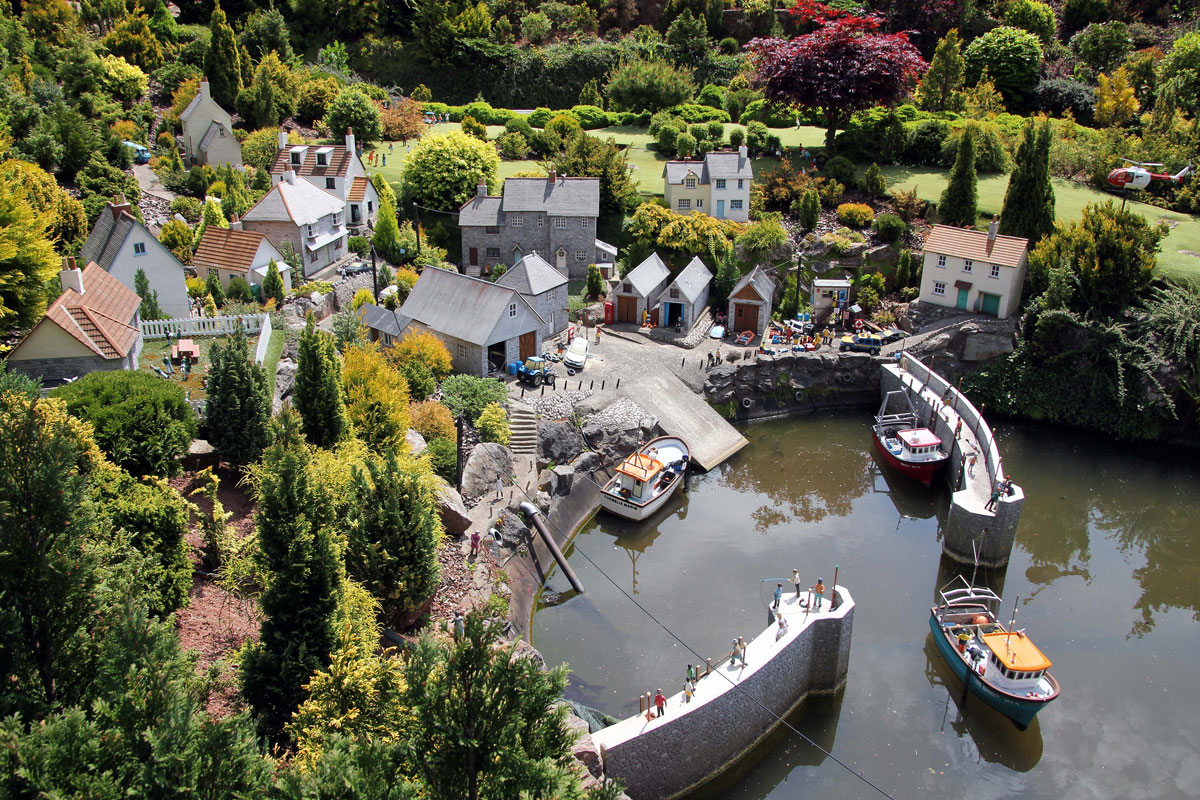 Not far from the Model Village is a path that zig-zags down to Oddicombe Beach, but it’s more fun to catch the Cliff Railway which has carried hundreds of thousands of people up and down the cliffs since 1926.

The ride doesn’t last long but it doesn’t cost the earth either and is all part of a holiday experience. 2019 prices were £2 one way and £2.80 return, and definitely worth the extra 80p if you intend returning directly back up to the top, believe you me.

In my opinion though it’s a better idea not to go straight back up because it’s worth having a look at what’s on offer down at sea-level first.

The beach is pebbly and not ideal for paddling but it’s still worth chilling out for a bit at the Three Degrees West Café Bar and Bistro. A word of warning though – don’t get too close to the cliffs next to the beach because they are prone to landslides as you won’t fail to notice.

What I do recommend though is a walk along the footpath to Babbacombe Harbour. It’s not far, and at the end is the Cary Arms, which is a bit more luxurious since it was taken over by Peter de Savary, but still a great spot to chill out with a long cool drink on a hot summer’s day.

Where the car park is now situated was the spot of an infamous murder back in 1884. John ‘Babbacombe’ Lee was sentenced to hanging for killing his wealthy female employer. Three times they tried to hang him and three times they failed. Consequently, he was given a life sentence instead and eventually walked free. Ever since, he’s been known as the man they couldn’t hang.

There are a few alternative ways to get back to the top. The shortest is the road from The Cary Arms which is bad enough to drive up let alone walk. Alternatively, there’s an easier route up through the woods. If, on the other hand, you don’t want anything too strenuous you can always walk back to the Cliff Railway. I wouldn’t recommend the road if I’m being honest.

By way of interest, near the top of this switchback road is the former Babbacombe Cliff Hotel, which prior to that was a private manor house belonging to a family member of Oscar Wilde’s wife, and where they came to stay in 1837. While he was here he wrote ‘A Woman of No Importance’, and whether there was any significance to that title or not I doubt, but his wife might well have fitted that description because his love of Babbacombe was only matched by his love for other men, and in particular, Lord Alfie (Bosie) Douglas, who would join him while his wife was away.

It was Bosie’s father, the Marquis of Queensberry who made allegations of Oscar Wilde’s sexuality which ultimately led to his incarceration at Reading Jail.

Whichever route you take, you’ll end up back on Babbacombe Downs, where, if you were one of those people who used to enjoy Saturday nights watching ‘Seaside Special’ on the tely, then you might want to consider getting some tickets for the variety show that is still a perennial favourite at the Babbacombe Theatre.

The theatre has been running since the 1930s and people who did seasons here when they were just starting out include Bruce Forsyth, Ted Rogers and Roy Hudd.

Believe it or not, 83-year-old Roy Hudd is performing again here in 2020, but it has to be said that the venue caters to smaller audiences rather than any specific type of audience.

Whether you’ve gone to see a show or not, you’ve probably worked up that appetite by now (unless you’ve given into temptation on the way round) and there are plenty of bars and restaurants to choose from; but maybe you would simply prefer to end the day with those fish ‘n chips you deprived yourself of earlier and just sit here and admire the view – and who could possibly blame you for that?