If you’ve come to Dartmouth and wondered what the imposing red-brick building overlooking the river is – then wonder no more. The Britannia Royal Naval College is the training establishment for officers of the Royal Navy, and if you’re as inquisitive as me as to know what goes on inside, you’ll be pleased to learn that there are guided tours available for the general public.

Before this building was constructed, officers were trained in a number of different locations. Traditionally, sea-based apprenticeships meant that officers were thrown straight in at the deep end as it were, but in 1733 a Royal Naval Academy was established at Portsmouth. In 1806 its name was changed to the Royal Naval College, but not everyone thought that studying in a classroom was the best way to train sailors, and in 1837 it was closed down.

It must have been recognised that academic knowledge also had a part to play in the training of officers because in 1859 it was decided to convert the ailing hospital ship HMS Britannia into one for training cadets. In 1862 she was moved from her home at Portsmouth to Portland, but a year later was transferred to calmer waters at Dartmouth.

By 1869 the former hospital ship was in intensive care herself and ended up in the breakers yard. She was replaced by HMS Prince of Wales, which changed its name to HMS Britannia, and even though HMS Hindostan had been added in 1865 to help out, overcrowding on the two hulks meant that a shore-based building was becoming a necessity, and in 1898 work started on building the Britannia Royal Naval College.

The building was completed in 1905 to a design by Aston Webb, an architect who became known for his work on several London landmarks including the V&A Museum, Admiralty Arch and the redesign of the front of Buckingham Palace.

Talking about Buckingham Palace reminds me that three future kings trained at Dartmouth. George V joined HMS Britannia when he was just twelve years old, his son, who became Edward VIII before abdicating, spent two years on HMS Hindoustan, and ‘Bertie’, who was to become George VI, joined the college in 1911.

For those of you who like little snippets about the Royal Family you might also be interested to know that on a visit to the college just before the outbreak of war in 1939, King George VI was accompanied by his wife and two daughters. The occasion was to be the first time that Princess Elizabeth met her future husband, Prince Philip of Greece, who was here as a naval cadet. Incidentally, Queen Elizabeth’s two eldest boys, Prince Charles and Prince Andrew also attended the college.

I think that the best way of describing of what there is to see inside the college is by showing you a selection of pictures I took while I was there, and I’ve included captions which will explain what you’re looking at. 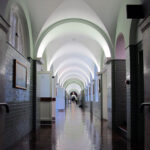 Walking through the Corridors 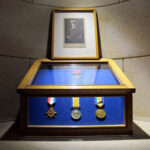 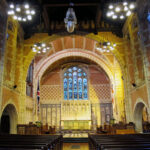 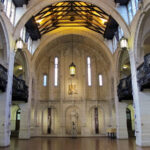 The Main Hall or Quarterdeck 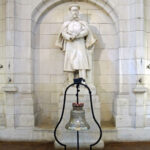 King George V and the Britannia Bell in the Quarterdeck

The Battle of Trafalgar by William Lionel Wyllie valued at £500,000 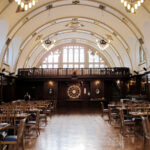 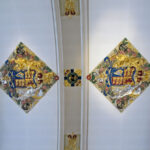 The Ceiling in the Main Dining Hall

The pictures don’t tell the whole story because most of the interest on my visit came from the guide who took us around. He was informative, interesting and humorous, and although the tour was supposed to last around two hours, it was nearer to three, but nobody minded in the slightest as it was that good. If you feel that a trip like this would also interest you, then you can find all the information here. I highly recommend it.